There’s something about the lakes area that coaxes people to return again and again, even years later. Perhaps it’s the idyllic views, the soothing sound of the water gently lapping at the shore, the charm or the friendliness. For one homeowner, it was all of the above. After living in several locations around the world, her heart called her back to Lake Beulah and a beautiful piece of land where she would build her dream home.

Having frequented Lake Beulah as a child, the former pharmaceutical industry executive wanted to live a quieter retirement life in the same spot so many memories were made for her. “My grandfather had the property next door, probably from the time I was six, and we used to come out here on weekends. I was never a big water sports fan. I was the kind who sat with my feet in the water.”

After living first in Milwaukee, then Huntington Beach, California, then Fort Worth, Texas, the homeowner’s work finally took her to Switzerland.

She was living there when the lake plot of land became available. She wasted no time and purchased the property in 2007. There was originally a home on the property, which she rented out for a time. But she felt a stirring; that it was time to put down roots. She decided to replace the old home with a custom home of her own, first meeting with the late architect Tom Ela in 2010.

He lived nearby, and she says, “He said the good part about this job was that he could kayak to work. I also picked him because he designed my aunt and uncle’s house.”

And it’s truly a family affair for the homeowner, whose aunt and uncle now reside on her grandfather’s former property, just a stone’s throw from her home. Her sister and her family live on the lake, too.

A VISION FROM AFAR

As she began to transition out of her career, she helped to carry out the building process from thousands of miles away in Switzerland, exchanging several emails and photos with Ela, general contractor Scott Watson of Scott Watson Construction and designer Joan Vogel. She also made occasional trips to see the progress in person.

“It was pretty seamless,” she says. “They understood my tastes and what I wanted in the style.” She adds that when it came time to make a decision, she was typically offered three choices of a particular feature, bringing even more simplicity to the process.

The homeowner shares that she “took pieces of things” she liked from all the places she’s lived, such as the radiant floor heating that encompasses much of the house, a common feature found in Switzerland.

And since she has connected with so many people across the globe, she naturally has a fair number of guests frequenting her home. She kept this in mind during the concepting of her home, too.

“My guests typically don’t stay for one day. They stay for a week or two, so I wanted a place that was comfortable and I wouldn’t have to rearrange my life. When you’re in a condo or an apartment, the sofa sleeper comes out. Or you might have to move a desk. I knew from the beginning that I didn’t want to do that.”

Many green practices were also applied during the building process. Great care was taken when it came to the large oak trees that took residence there, a challenge as they navigated the narrow 45-foot-wide lot with machines and equipment. Another eco-friendly aspect is utilized when it rains. She explains, “Rain drains off the house and runs through a rain garden before going off into the lake.”

At long last, she moved into her completed home in spring 2012, and at the same time, she started her retirement. In a décor style the homeowner describes as “casual elegance” and “cottage,” she now spends her days cooking (her massive collection of cookbooks in the living room attests to this) and enjoying the “peace and quiet” of the waterfront views surrounding her 2,800-squarefoot Nantucket-style abode.

In addition to all that peace and quiet, she appreciates the distinctive details that her design team included in the home, such as the striking vaulted ceiling in the upstairs guest room. Nicknamed “The Tree House Room,” it also happens to overlook several old oak trees. Or the barrel ceiling in the master bedroom, which the homeowner refers to as “a surprise from my architect” that “goes well with the window.”

She notes that Vogel, her designer, came to develop a sixth sense of sorts around her affinity for certain colors, textures and patterns.

Calling the upstairs her “favorite part of the house,” she says that by the time they reached that portion of the process, Vogel “was on a roll with what my likes and dislikes would be in terms of fabrics.” Weaving in custom pieces rendered in standout materials, she especially adores the striped cushion on the window seat in her upstairs hallway, the colorful embroidered window treatments in the guest room and the vibrant, Americana hand-hooked rug that completes the look of the hallway.

The homeowner’s design team also paid heed to a unique request: that there be sconces in most of the living spaces in the house in place of floor and table lamps to avoid a cluttered appearance. So, there are sconces to match the mood of each room. Brushed silver sconces in the guest room and bathrooms. Pretty sconces in the master bedroom festooned in sea-glass beading. Glass sconces in the master bath. And they all provide plenty of light in the absence of traditional lighting.

She favored walk-in showers without doors, implemented throughout the home and showcasing lovely tile work, like the honeycomb pattern in the guest bath. She credits Tom Stamm at Absolute Tile & Stone for doing “an incredible job.”

The homeowner shares that she feels at peace in her home, and revels in the “comfort” that it brings. This is a feel that’s accomplished through the tumbled river stone fireplace, the warm red birch hardwood floors and cozy, customized furniture.

“Anywhere I’ve lived, I’ve lived near water,” she says. “I always like the water aspect. It’s relaxing. It’s peaceful. And living here is just what I expected it would be.”

This home was featured in the Lake Geneva: Winter 2017 issue.

A Look at Waubesa Shores Condominiums 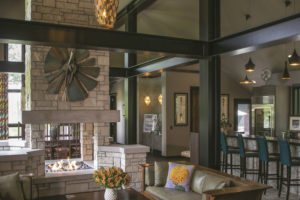