From Humdrum to Heavenly

The pint-sized girl was traumatized.  But no matter how kind the staff was at The Rainbow Project, she couldn’t talk about it. Then she spied a beautiful corner reading nook fashioned with a curved curtain rod and drapes. Scrambling into the space and pulling the drapes shut so that she didn’t have to look at anyone, she was finally able to open up.

That hideaway, so beneficial to the six-year-old, was a recent gift. It had been installed gratis as part of an extreme makeover of the nonprofit’s digs on East Washington Avenue, courtesy of Design for a Difference Madison.

Design for a Difference began in 2013 as a national movement. The brainchild of The International Design Guild, an elite group of designers and showrooms, and Mark Brunetz, former TV host of the Style Network’s Clean House, its concept was simple: Design professionals and students from the U.S. and Canada would compete for $20,000 in goods and services to renovate a space in their favorite charity.

In 2014, Madison-area designers and companies jumped into the contest, nominating several groups. Unfortunately, none were selected, says Angela Skalitzky, vice president of retail sales and design at FLOOR360, a Madison flooring company. “When they didn’t win, we said, ‘We’re going to do this anyway,’” she says. With that, Design for a Difference Madison was born with FLOOR360 being the main sponsor.

A year later, Madison’s very own contest debuted, and the inaugural winner was The Respite Center. Part of the Center for Families (now called RISE), the Fordem Avenue nonprofit works to build strong families and prevent child abuse. To kick off the 3,500-square-foot makeover, Skalitzky and Bob Tobe, owner and president of FLOOR360, threw a party for local interior designers, explained the project and requested help. Nearly all of the designers present signed on. “I was amazed,” says Skalitzky.

The group composed of about 20 designers got to work. Nine months and more than $140,000 in donated goods and services later, The Respite Center received its transformation: cheerier colors, cozy spots, a kid-sized theater and marketplace, an additional bedroom, and, in the center of the kids’ main gathering space, a tall tree surrounded by a circular bench.

Not surprisingly, The Respite Center staff and clients were thrilled with the results. And the designers were inspired to see the positive impact the now-inviting spaces, fresh furniture and good design had on everyone, especially the kids. “When kids feel they’re in a respectful environment, it evokes the right emotions,” Skalitzky says.

Since its inaugural success, Design for a Difference Madison has grown. The group’s second project in 2016 was a $330,000, 7,000-square-foot refurbishment of The Rainbow Project, with 33 designers assisting. In 2017, 38 designers tackled a 12,000-square-foot makeover at Centro Hispano. That project, worth more than $600,000, is the largest Design for a Difference project nationwide to date. “Madison is leading the way nationally in the size and the scale of what we’re able to do because of the help of the community here,” says Skalitzky. (The program is now a local movement in several dozen communities throughout the U.S. and Canada.)

So what’s the draw for designers to sign on for months of free work? For Dani Frank, owner of independent design firm Distinctively Danette, it’s a way to collaborate with talented peers, plus give back to the community. Frank, who has worked on all three makeovers, now includes her husband, three sons, daughter-in-law and one son’s girlfriend in the projects.

Tara Buedding, owner of The Happy Home Organizer and also a three-time volunteer, participates because it gives her joy. “This has been one of the most rewarding things I have ever done in my life,” she says.

Now at the start of its fourth year, Design for a Difference Madison has a set process. The group solicits nominations beginning in January—although they’re accepted yearround—then evaluates each to determine which group can be more successful and expand its reach in the community if its work space is refurbished. The recipient is announced at a spring kick-off party open to the public. And then, the work begins.

The designers each choose a specific space to refashion and consult with the nonprofit’s employees about their needs and current space usage. Meeting every few weeks as a group, they determine a makeover theme, color palette, furniture needs, lighting and more. While the designers have a lot of freedom to remake their spaces as they see fit, they’re also in charge of securing the monetary and material donations to fulfill their visions—and to perform the actual work.

In October, the chosen nonprofit’s staff is temporarily moved out of their space for two weeks while the designers swoop in and do their magic, with the help of additional volunteers. When the paint is dry and the last piece of artwork hung, a big reveal takes place.

“We had to close our eyes, so we were shuffling in and holding on to one another,” says Sharyl Kato, executive director of The Rainbow Project, about their 2016 reveal. “At a certain count we could open our eyes. Even thinking about it, I start crying. It was just breathtaking. I couldn’t believe it.”

Gone were The Rainbow Project’s drab walls, the worn, mismatched furniture and the stained carpeting. In its place were rooms painted in soothing tones accented with pops of color. A long hallway was decorated with trees in relief, evoking the feeling of walking through a forest. New flooring and furnishings completed the look.

“We always tried to make it as inviting as possible here,” Kato says. “But for 37 years we’ve had a waiting list, so every dime we had we spent on services.”

Today, some 18 months after The Rainbow Project’s makeover, Kato is still excited. In addition to enjoying a beautiful work environment, the redesign spurred additional, unexpected benefits. Kato says she’s more organized and efficient now that her office has functional, appropriate accoutrements. Other friends and community members stepped up, redesigning the group’s dated logo and updating its website and technology.

“This makeover was the community saying, ‘We’re here for you,’” says Kato. “And it’s hard to explain how inspiring that is.”

YOU CAN HELP, TOO!

The 2018 Design for a Difference winner is the East Madison Community Center. To donate money, supplies or labor, go to floor360.com/d4ad/ or designforadifference.com and click on Get Involved.

Best for the Boat

It’s All in the Details 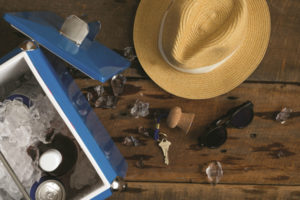 Best for the Boat

All-American Style: Have a little fun with a vintage-inspired cooler that’s a step up from your standard beverage holder. Retro...
Copyright 2018 Nei-Turner Media Group
Back to top