A Taste of Tradition 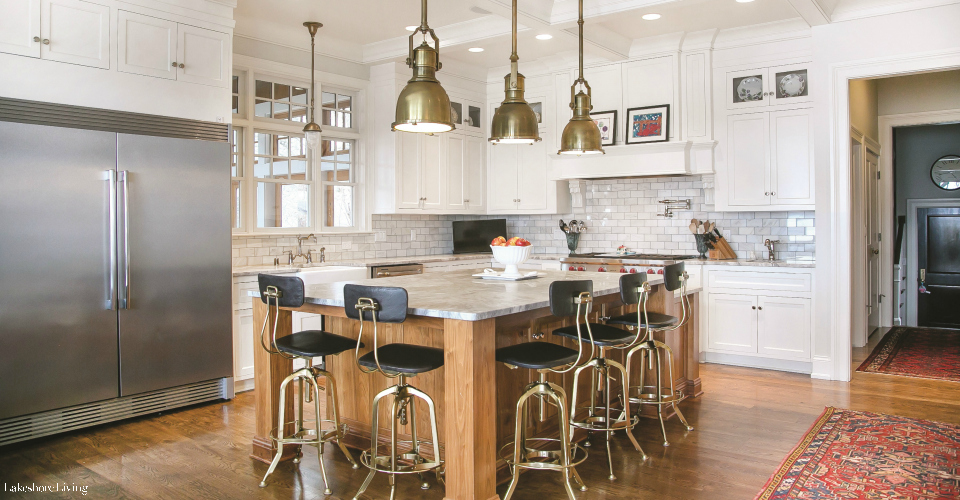 When a Midwestern couple moved back to Wisconsin from New York City, they knew they wanted to be on a lake. They were due to have their first child, so they desired to be closer to family. They also had an idea of where they wanted to be, as both knew the area well, having grown up in Hartland and Elm Grove. The couple settled on a spec home on Moose Lake and lived there for a while. But with their young son, hunting dog and bull mastiff, they soon realized after three years they were outgrowing the property and the small yard quickly.

So they started their search again and honed in on a property on Beaver Lake this time with 150 feet of frontage and most importantly, a large flat yard that adjacent to the lake.

“It’s hard to find a lake property with a flat yard, so this [property] was unique in that sense, because we wanted a big yard,” explains the wife.

The family, which now also had another son and daughter, lived in the home on the property for two years, trying to decide whether they should remodel or rebuild from scratch. The couple learned that rebuilding would be more cost-effective, so they worked with Jim Ellingson of Ellingson Builders in Hartland (who had also built their Moose Lake home) and architect Gloria Lehrer of Designs Galore on the new build.

“[Gloria] came up with the plans for this house. She knew exactly what we wanted,” says the homeowner. “I wanted [the house] to feel open. [And] I wanted a dining room because growing up, my grandparents entertained a lot, and that was a big influence on my house—[thinking about] their house.”

She also wanted a designated living room “that was more formal,” she explains, a kitchen separate from the living areas, an office on the first floor, a second-floor laundry room and a first-floor mudroom for washing their dogs. She also wanted all of the bedrooms on the same floor, versus separating the master from the other bedrooms. “I know it’s popular for the master suite to be on the first floor, but I wanted to be upstairs with the kids.”

In May 2013, the family moved into their new digs, which is best described as a mix of OldWorld influences mixed with modern touches. “I wanted people to walk into the house and not know it was a new house,” says the homeowner. “One of the biggest compliments someone has ever given me was that when they walked in, they found out we had just built it, and they were surprised. They thought it was an old house. But I wanted that.”

The front living room painted in Benjamin Moore’s Coral Bronze has a more formal look, softened by a comfortable custom sofa by Lee Industries and Pearson chairs, ordered through Bill Koehnlein of Collaborative Design, and a cool antique Oriental rug (picked up while the couple lived in New York City). The space is also glammed up by brass accents in the coffee table and mirror. A side table and hutch (which was the wife’s grandmother’s) displays mementos, including family pictures and antique china cups.

“I wanted everything to be neutral and gray throughout my whole house, but I have this one room, which has this bright color, and this hue reminds me of a color my grandma had in her house. I was inspired by her living room,” she says.

Adjacent to the living room is another sitting room that the wife wanted to be “dressy,” but still comfortable for the whole family. Working with Koehnlein of Collaborative Design, the two dreamed up a space with a distinct East Coast vibe that has crown molding, built-in cabinets and a formal fireplace. (Fun fact: the cabinet on the right houses the TV—it rises up from below!) Benjamin Moore’s Gray Owl (which is also used throughout the home) covers the walls, which is the perfect backdrop for the soothing palette. A fun teal velvet chair holds court in the corner—a pop of color in the otherwise neutral space. The couple picked up the seascape painting that hangs above the fireplace at an estate sale—an appropriate nod to their lake life.

In the back of the room is a wet bar, a recommendation from Lehrer, with a honed quartzite countertop, small refrigerator and cabinets. Brass fixtures add gleam to the area—something the homeowner loves. “People can come in and we can welcome guests with refreshments and snacks,” she says.

Around the corner is the semi-formal dining room that she also had to have. “I like that this room flows into our living room so it doesn’t feel like we’re sitting down to the dining room having this formal dinner,” she says. The homeowner loves to pull out her grandma’s hand-me-down china as well as her own set to entertain with in here that’s on display in the upper cabinets in the kitchen. The Jonathan Charles oval mahogany dining table was another recommendation from Lehrer, and above it hangs a chandelier from City Lights.

FUNCTION FOR THE FAMILY

Certainly the hub of the home is the spacious, show-stopping kitchen with an informal sitting area. The beautiful space marries French bistro style and East Coast traditional touches for gorgeous effect. Honed quartzite countertops are juxtaposed against marble-look subway tile throughout. Retro Ferguson Plumbing faucets carry through the sense of tradition, as do the coffered ceilings and Oriental rugs scattered throughout. Leather and brass barstools from Restoration Hardware round out the comfortable, upscale room and match perfectly with the Visual Comfort nautical pendant lamps that hang above the island. The oversized stainless steel refrigerator is a must for the five member family, says the homeowner.

If you look through the window over the white farmhouse sink, you’ll see the amazing attached all-season porch outfitted with cozy furnishings and an elk skull and elk sheds that the couple picked up in New Mexico and Idaho (the husband is a hunter). A large fireplace makes the room cozy, the homeowner says. She says they sit in here to hang out after the kids have gone to bed or when she wants a respite from the busy family areas. “If it’s warmer than 20 degrees, we sit in here. [And] with the fire on, it’s cozy in here. We do use that room quite a bit,” she says.

The upstairs master suite is also a retreat for the couple, with enviable lake views. Four windows frame one wall, and above the sitting area the ceiling has an interesting hollowed-out look. That’s because above it the roof peaks into a bell shape (seen when you’re outside of the house). “Bill [Koehnlein] and Gloria [Lehrer] definitely helped with this space—there was a lot that went into it,” says the homeowner. The furnishings are a mix of new pieces (like the custom-made curly maple four-poster bed) and items her dad made, including a mahogany high boy chest of drawers. The homeowner also painted one of the dressers a cool gray color.

Each child’s room is masterfully decorated, too. One son’s room is painted a deep navy blue and has interesting pieces on the wall, like a European mounted elk skull and colorful real insects preserved in frames. A sprightly Union Jack dresser rounds out the whimsical, yet grown-up room. The other son’s room is painted a mushroom gray and also has a European mounted elk skull, alligator print and vintage-look ceiling fan. But the coolest part of the boys’ rooms is that they actually connect via a loft space. Each room has a ladder that leads up the cozy spot that the wife says the boys will even sleep in sometimes. They also have a Jack-and-Jill bathroom. The daughter’s simple, sweet room has a butterfly collage on the wall and vintage bed passed down from the wife’s family. She also has her own bathroom.

The home truly is tailor-made for the family of five, and the homeowner is happy to have an abode that fits everyone and their lifestyles.

“Beaver Lake is a great swimming lake—it’s small and it doesn’t have a lot of boat traffic, so we like that,” she says. “I like the setting we’re on, as there’s a lot of areas for the kids to play in the yard since they’re so active.”

A Chic and Contemporary Home on Okauchee Lake 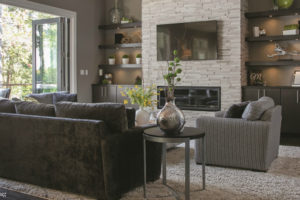 A Chic and Contemporary Home on Okauchee Lake

By Shayna Mace | Photography by Shanna Wolf When Gina Gaspardo and Matt Miller decided to rebuild their lake home, it was actually...
Copyright 2018 Nei-Turner Media Group
Back to top