A Lofty Abode Above Downtown Madison 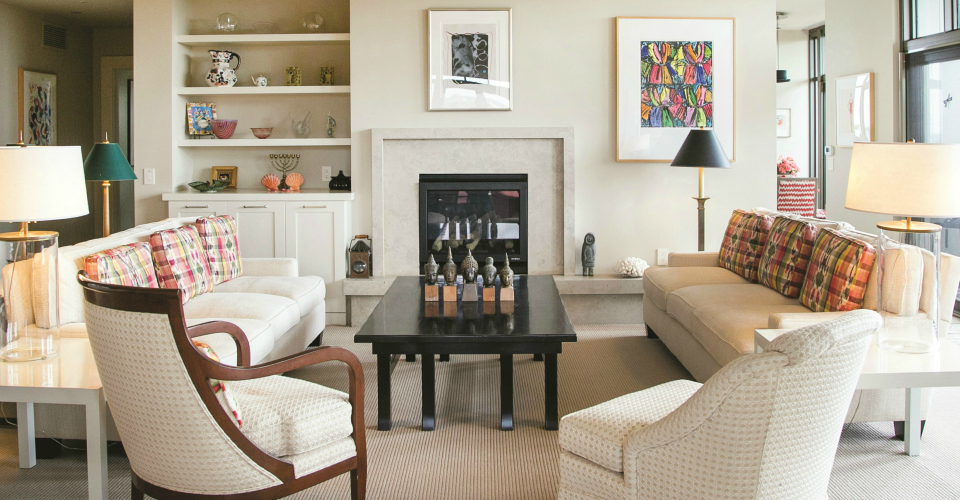 When Ellen and Peter Johnson started thinking about downsizing from their lakefront Maple Bluff home, the couple knew they still wanted to remain on the lake—sans the maintenance that comes with a single-family home. But condos on Madison’s lakes are few and far between, so the couple had instead toyed with the idea of moving full-time to Montecito, California, where they own a second home.

But then Ellen’s ex-husband Jerry Frautschi approached the Couple in 2014 with an idea: he had bought a white-box penthouse at The Edgewater and decided against moving into it—would the Johnsons like to purchase it instead? Peter and Ellen considered it, and decided to buy it from Frautschi in October 2014. Right away the couple started consulting with Dimension IV Madison Design Group to craft the floorplan, and with Doug Zander and Michelle Hackworthy of Zander’s Interiors for their expert advice on layout, materials and eventually, décor. What resulted from two long years of construction and decorating is an exceptionally-designed, yet comfortable piece of heaven on a lofty perch, high above Madison’s downtown and Lake Mendota.

Fitting together the floorplan was like a jigsaw puzzle—the Johnsons knew they wanted the basics in the design, including a master suite, his-and-hers office spaces and a guest bedroom. Because of how the high-rise building was laid out, the bathrooms, kitchen and laundry room had to be in specific spots, because of where the plumbing was located. So Dimension IV Madison Design Group drew up the plans and the Johnsons asked Zander and Hackworthy for their opinions on the condo’s layout.

“That was convenient before the construction started, to think it through, see the layout, look at what they had and make sure we could incorporate the things that were most important to them in the house. That was a huge factor in a lot of the things we did,” says Doug Zander, owner of Zander’s Interiors. The team made tweaks in the design, including carving a niche out in the front entryway for a treasured painting of the couple with their two poodles.

Being located in a high-rise building also presented other considerations—like making sure pieces could actually fit in the freight elevator, says Paul Dybdahl, owner and lead designer of Dybdahl Design, whose company outfitted the cabinetry throughout the whole condo.

“Anytime you’re doing something in a high-rise, you are thinking about what you’re creating and how it’s going to get to the job site.

Not only how it can be constructed and installed, but can it be physically moved into there?” says Dybdahl.

Luckily there were few hiccups in the construction timeline, and the couple was able to move in in May 2016.

Upon entering the penthouse, guests are first greeted by world-class art by Richard Dibenkorn and Tandem Press’s Judy Pfaff. An antique bench that was Ellen’s grandmother’s sits in the aforementioned nook, below an oil painting by New Orleans-based artist Rise Delmar Ochsner. The main living space opens up with creamy white walls, tons of light and stunning views of the capitol building in the distance.

“They were looking to have a downtown living feel, but they still wanted the place to have a warm feeling,” says Zander. “So that was the main focus—clean spaces, simple colors, but not too traditional. So, it has a transitional feel to it. [The Johnsons] get so much natural light in there, so they wanted to make sure it’s bright and sunny.”

The other major design focus? Assembling a polished space integrating the Johnson’s stunning art collection. As a former art buyer for Marshall Erdman & Associates’ (now called ERDMAN) senior living and healthcare facilities, Ellen traveled the world, collecting art from every corner of the globe. And she can tick off the name of every artist whose work is hanging in the penthouse, along with interesting tidbits about their work and life. And each room quietly lets the art shine, while also injecting stylish design at every turn.

“Ellen likes color, so we added shots of coral throughout, whether it was in pillows or furniture,” explains Zander. “We did all exterior fabrics (including in the den’s furniture) because of the amount of sun, and they didn’t want a fading issue. We used almost all of the furniture they already owned, and then added new things that would be conducive to the space.”

Built-in cabinetry by Dybdahl Design in the den adds ample storage and a wet bar for entertaining. A desk and game table also add function to the space for work and play. Hung above an antique rice chest from China in the corner is an original print by Alexander Calder.

In the California-inspired kitchen, eye-pleasing cream-colored cabinets juxtaposed against walnut countertops and dark cork flooring pack a lot of style—and utility—into the space. To the right is a bank of windows that lend eye-popping views of Lake Mendota, which makes washing the dishes a little easier. Two open shelves above the sink hold Ellen’s Czechoslovakian puppets and Norwegian horses.

Even for serious art collectors, the Johnsons managed to inject a little whimsy into their space too—like in the fedora pendant light fixture above the kitchen table, and metallic bunny wallpaper in the guest bathroom.

“Doug was showing me orchids and birds and parrots for the wallpaper— and I said ‘no, no, no,’” says Ellen. “Michelle [Hackworthy] was listening to us, and she came over and said, ‘I bet you’d like this bunny wallpaper.’ And I loved it, and everybody loves it! It’s just so unique—and we had to have a little fun.”

Echoes Zander: “The bunny paper is whimsical and unexpected—we ended up making that work, and it’s great that something that’s not the norm works so well in that space.”

There’s no question that the Johnson’s penthouse is a one-of-a-kind—just like the artwork they’ve collected and the lives they’ve led. It’s the perfect showcase for who they are.

“It’s the first time we’ve lived downtown,” says Ellen. “Having access to restaurants and being downtown … and the hotel is very accommodating. And I like that we have less responsibility than we did at our old house on the bay.”

This home was featured in the Madison: Fall 2018 issue. For more photos of featured Madison homes, visit the Madison Gallery

Warmth and Light on Lake Mendota

A Contemporary Collaboration in Monona 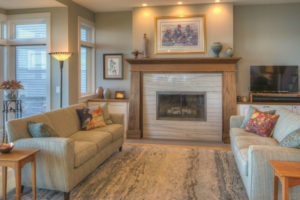 Warmth and Light on Lake Mendota

By Shelby Deering | Photography by Chris Joyner, Chris Joyner Studio, LLC Yvonne and Jim Gern wake up every morning to a stunning...
Copyright 2018 Nei-Turner Media Group
Back to top