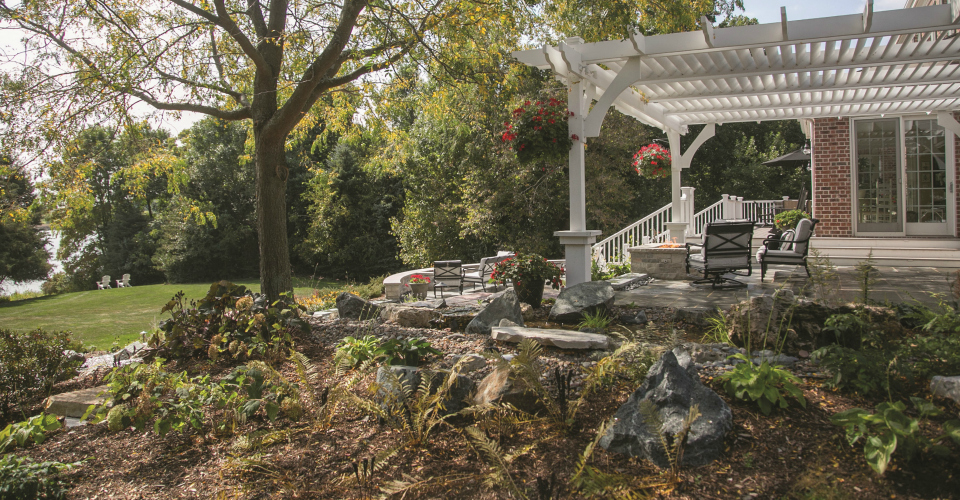 Keith and Kathie Dunton knew they needed a new patio at their home on Ashippun Lake in Waukesha County, so they contacted Tom Auer of The Ground Crafter to help with the project. However, when Auer first got a look at the home’s existing outdoor space, he realized that the Dunton’s property—sitting on four acres and containing more than 100 feet of lakefront—had a lot of unused potential. Beyond that, the existing deck and surrounding patio displayed structural damages so severe that Auer felt it unwise to do a basic replacement.

“The entire hill was sloughing off down the slope,” Auer explains. “That was cracking the foundations for the old patios. I told them the whole thing had to come out, otherwise it would have just been throwing good money after bad.”

By demolishing the old deck and patio space, Auer was able to work with the Duntons to completely redesign the outdoor living space. Utilizing a clever terracing design, Auer nearly doubled the amount of space on the decks and patios, to about 2,600 square feet. The new plans introduced two distinct terrace levels, and included a pergola, an outdoor kitchen and dining space, a hot tub, two fire features and a water feature meant to suggest a natural stream.

Auer says part of the intention in redesigning the outdoor space was to make it look like the home had been placed into its natural environment with very little effort. “This home is in the Kettle Moraine region, so one of our goals was to keep it looking like the house was dug into the side of a natural kettle,” he says. In order to accomplish this, Auer and his team began by re-grading the space between the home and the lake, and then installing several subgrade walls to ensure structural integrity. “The walls that surround the hot tub on the lower terrace, for example, there are actually hidden support walls behind them,” he explains. “The outcropping stone is not meant to be structural—it’s decoration. So behind that, there’s a thorough concrete rebar wall holding up the upper terrace above.”

The hot tub had long been a dream of Keith’s, but he confesses to being stumped as to how to incorporate everything he wanted with the classic Colonial architecture of the house, which the Duntons built in 2004. “The front of the home is very traditional and pretty and Colonial style,” Dunton explains. “We live on a lake, and we wanted to retain that Colonial design but still take advantage of the feeling of living on the lake. It was a challenge.” Keith credits Auer with his ability to incorporate all of their ideas into a design that worked with the existing house and property.

To do so, Auer made liberal use of natural stone in the design, including New York blue stone, shipped from New York and Pennsylvania, and local Lannon stone. The natural stone steps leading to the lake were a feature of the Duntons’ previous patio that Auer’s team saved during the demolition and repurposed in the new design. Another important element Auer incorporated into the plans was a 20-year-old honey locust tree that the Duntons were determined to save. “We started by establishing a protection fence around the root zone,” Auer says. “Because of that, everything on that side of the house was done by hand, because heavy equipment could have shocked the tree roots. And then at the end, any roots that we disturbed were root pruned.”

The new outdoor living space presented plenty of opportunity for landscape plantings, including fern, astilbe, moneywort, coneflower, coralbells, Ligularia, hydrangea, rhododendron, Hughes Juniper, Lamium, hostas and geraniums. In keeping with the natural environment, Auer worked the plantings in among boulders unearthed during the excavation. “The kettles were formed by retreating glaciers, which left large boulders and rocks behind in the soil,” Auer explains. “While excavating in the area, it’s very common to find these large boulders, so we repurposed some of those, set them aside and then put them back into the environment.”

The finished product has exceeded the Duntons’ hopes for the project. “My wife and I love to go out with a cup of coffee or a drink in the evening and sit by the stream,” Dunton says. “There’s just something very soothing about the sound of the water.” He says a recent guest commented that they must be happy with the new landscaping and outdoor space. “That’s it exactly,” he says. “We are very happy with it.”

Auer and his team saved and repurposed naturally occurring boulders from the soil during the re-grading of the property to create a landscaping plan authentic to the home’s location in the Kettle Moraine.

Auer and his team designed the new upper deck to ensure that no railings obscure the view of the lake from the sun room. The pergola enhances the amount of shade provided by a 20-year-old honey locust the homeowners wanted to preserve.

A pondless water feature mimics the effect of a natural spring cascading over the landscape. The nearby patio seating provides an ideal breakfast space—the Duntons say they love to have their morning coffee near the stream.

A gas-operated fireplace on the lower terrace matches a similar fire feature on the upper deck and provides additional entertaining space. In designing the new outdoor living space, Auer, of The Ground Crafter, aimed to maximize the view of the lake from each level.

Choose a plant palette and stick with a common color theme throughout. Plant groupings of complementary foliage with some contrast colors, but stay away from colors that clash while blooming.

Consult resources on naturalizing plant schemes and companion varieties. For example, if a Ligularia is chosen in a small group, also consider planting Rodgersia as both plants prefer rich, moist soil.

Take advantage of the expertise available at your local garden center. Find someone that is excited to help you and not just somebody that “points you down the aisle.”

For more complex landscaping, consider hiring a professional. Pricing can be surprisingly budget-friendly and their advice is invaluable in preventing frustration and ensuring your money is spent on plants that will thrive in your specific situation. 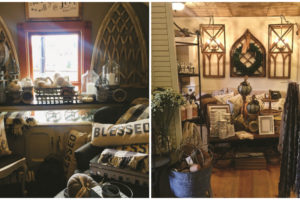 When Brenda Wistl opened Harvest Home in Pewaukee 18 years ago, it was because of her love of retail and the way it made...
Copyright 2018 Nei-Turner Media Group
Back to top