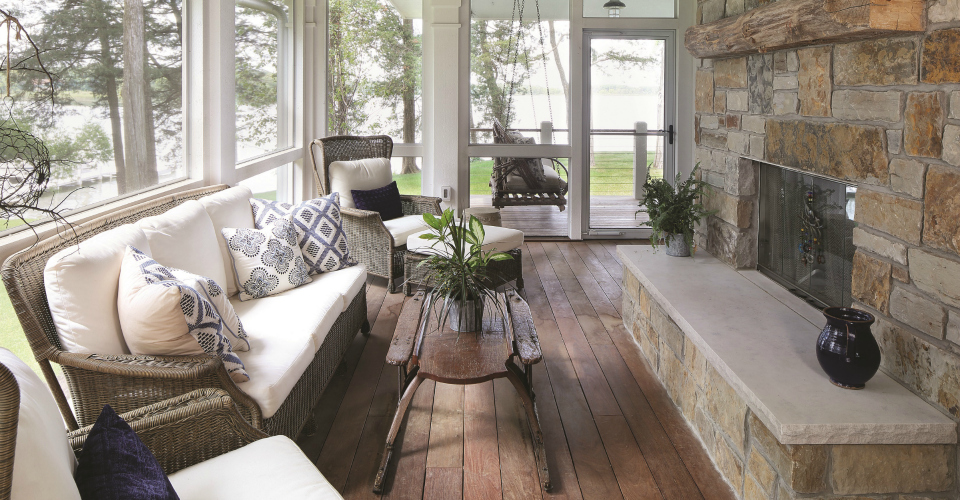 For Kim and John Seipel, their connection to Oconomowoc’s Silver Lake is not only familial, but historic. John grew up nearby in Dousman on Pretty Lake, and in high school was a dishwasher at Chuck’s Supper Club on Silver Lake.

“I always remembered it was the clearest lake,” says John.

One morning back in 1996 while reading the paper in their Mequon home, Kim noticed a cottage for sale. “Kim said, ‘there’s a house for sale on Silver Lake—that lake you always talk about in Oconomowoc,’” says John. So the couple drove over that day to take a look at it. They ended up purchasing the quaint property as a second home for them and their three children.

After nine years, the couple decided to make the full-time move out to the lake and bought a larger home as a primary residence. They sold the cottage to one of John’s brothers. In 2015, a coveted property went up for sale across the lake.

“We [had] always loved that property,” explains Kim. “This was our favorite property on the lake. When it came up for sale, we were really excited.”

The early-1900s green-and-white cottage was historic, with five bedrooms, a small kitchen and one bathroom. It was filled with Pabst Brewing memorabilia, as the previous owner was married to a Pabst executive. The couple took the plunge and bought the home, with plans to either renovate the existing cottage or build anew. They sold their other home to their daughter, who lives across from them on the lake now. John has another brother who also owns a home on the lake, too. (See the familial lake connection?)

After living in the home for a year, the Seipels decided the home needed too much work to renovate, so they met with Colby Construction Company Inc. to start fresh. “We thought if we’re going to build something new, let’s build it right,” says John.

“And their customer service was amazing and unmatched—they were really great to work with,” agrees Kim.

The couple first met with architect Paul Schultz of Sunarc Studios in Oconomowoc to flesh out the home’s design.

“We didn’t want a huge house—we wanted a livable house. I didn’t want a show house, [or] a house where … there are rooms you don’t even use. We wanted a functional house. This is our forever home,” says Kim. “And, I wanted to bring the outside in. We [have] windows everywhere because we have this beautiful view. We wanted to be able to see the lake from almost every room and our architect did that, except for one room.”

The couple’s other requirements included a first-floor master suite and plenty of room for guests. Pete Feichtmeier, owner of Colby Construction, was tasked with making the couple’s vision a reality.

“At the end of the day, we felt like we understood [the Seipel’s] vision and had an open mind to do some things for them that were out of the box,” says Feichtmeier.

The great room, which includes the living area, dining room and kitchen is the showcase of the home, says Feichtmeier. “The tongue-and-groove ceilings, beams and paneled walls are unique for this market.”

The hand-hewn ceiling beams are an important design detail in the great room—and one that the Seipels put a lot of thought into. John says the beams were made from trees that were cut down on The Golf Courses of Lawsonia and hand-crafted by Amish woodworkers. Much of the shiplap throughout the home was also provided by the woodworkers, too. It perfectly complements what Kim calls her “modern farmhouse” style.

Kim says she was heavily influenced by Joanna and Chip Gaines of HGTV’s “Fixer Upper” fame. Natural elements, like a repurposed barn wood coffee table (made by an artisan at the Elkhorn Flea Market), tin ceiling tiles and an antler chandelier (purchased in Arizona) add a healthy dose of coziness to the grand room with its vaulted ceiling. Restoration Hardware Outlet furnishings like the chocolate brown leather coach and buttery-soft suede armchairs play nicely with bits of greenery peppered in throughout the space, along with the vintage-look Persian rug under the coffee table.

The kitchen melds flawlessly with the living room, echoing the creamy white palette with dark soapstone counters, white tiled backsplash and open shelving in the corners that hold decorative pieces, like a ceramic bread box and a creamer shaped like a cow. A second marble-topped island from Pottery Barn holds court in the kitchen to double as a hangout spot or prep area. The couple also opted for a coffee bar with beverage fridge so guests could easily grab an espresso in the morning or bottle of water if they’re heading outside.

Tucked next to the kitchen is an adorable breakfast nook with a cupola ceiling. A Restoration Hardware Outlet table and chairs sit at the ready for a leisurely meal, and Target pillows punch up the style in here. A single pendant lamp shines down from the shiplap-covered cupola. Next to the breakfast nook and adjacent to the living room is the breezy screened-in porch—a favorite space for both John and Kim.

“We get the best sunsets,” says Kim. John says he likes to sit out here with his grandkids to chat.

Most of the other spaces of the home have Kim’s touch too—like the tranquil guest room with shades of blue, light wood furniture and a delicate wire chandelier. Another guest room uses reclaimed barnwood on a feature wall and has a buffalo-check comforter, rustic wood bench, faux fur throw and pillows, and mounted plaster deer and moose heads for fun.

The one room that’s all John is his office on the main floor. The pine board and batten panels on the walls (provided by the Amish woodworkers), ceiling beams, built-in bookcase, wood-burning fireplace (with porcelain tile detail) and family photos convey a sense of warmth and togetherness—much like John and Kim. John wakes up early and spends his mornings in here.

“We have a lot of family and host a lot of gatherings, and we wanted a space where everyone could gather and spread out—that was our vision,” says Kim.

What to Wear Now 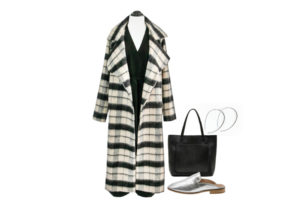 Mad for Plaid: This classic pattern is making big waves everywhere—and it deserves a rightful spot in your closet this...
Copyright 2018 Nei-Turner Media Group
Back to top