Full of Charm (and Family) on Moose Lake 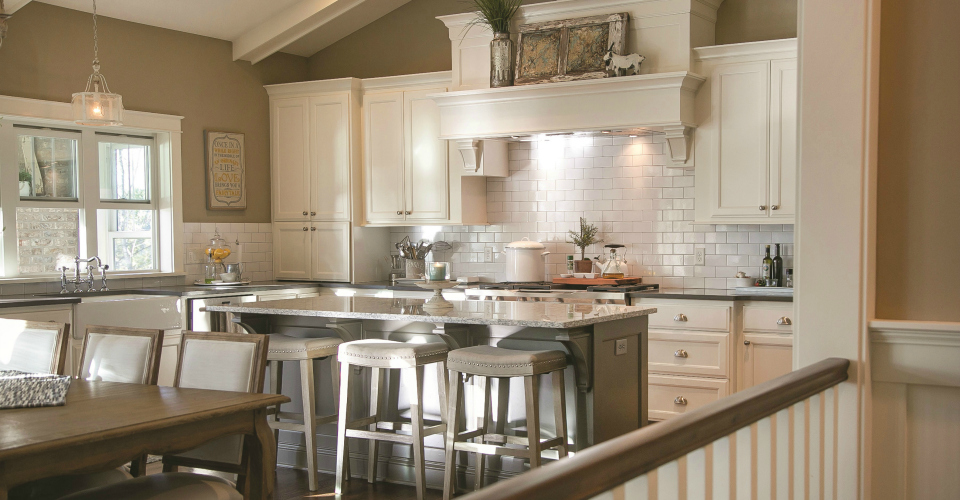 “Every lake here has its own personality,” says Laurie Flatt.

And that personality is what drew the family of five to Moose Lake from their Hartland home. “The kids were getting older, and we had always wanted to be on the lake,” explains Flatt. “Our dear friends have been living on this lake since 2002. So, our kids grew up coming here, and we always loved it here. And [Moose Lake] is such a hidden gem. It’s a kettle, and about 61 feet deep in the middle. The water is crystal clear.”

Laurie and her husband Steve spotted a 1950s cabin for sale that was part of the old Hasslinger Resort, that had since been broken up into land parcels. “It was red, and it kind of looked like the Seven Dwarves’ house,” says Flatt. “It was like two cottages were connected with a kitchen and living room between them, so each side was a mirror of the other. But we saw so much potential in it … so we decided to remodel it and sell our house.”

However, when the Flatts submitted their renovation plans to Joe Orendorf of Joe Orendorf Custom Homes, he told them it would be very expensive to renovate and they were better off building anew. So they had the old structure recycled (yes, there’s a company that recycles whole homes called Recycled Inc., says Flatt) instead of demolished. “It takes three weeks versus one day, but then once you’ve recycled everything, you get a tax report on the value of everything recycled. So, that helped our taxes—but [the materials also] didn’t go in the landfill. It’s a wonderful program,” says Flatt.

In the meantime, the family lived in the 600-square-foot guest cottage that was in the front of the property while the home was taken down and a new one rebuilt. The couple also started working on plans with Orendorf.

The Flatt clan is close, and Flatt knew the house plans needed to echo that.

“I wanted [the new house] to be open because it doesn’t matter if we have five TVs in the house, everybody’s on one sofa together with the one TV, or in the kitchen!”

The couple made sure the main level had an open floor plan for that reason, and also included some luxuries that Laurie hadn’t had in a house before, like a sunroom, big kitchen and a large laundry/mud room. Once everything came together a year later, it was then Laurie’s task to make the house a home. Which is her forté, since she owns real estate staging company Casa La Bella. She also worked closely with one of her former employees and friend Jill Kowalczyk, owner of Jill K. Designs, on the interior design.

“Laurie wanted a cottage feel on the lake. She also liked French country [style] as well, and you can see that throughout the house,” says Kowalczyk. “And she wanted to take advantage of the lake view, so there are no window treatments, and beautiful trim work and moldings around the windows.”

Kowalczyk and Flatt achieved that getaway feel by selecting a neutral color palette of white, warm gray and beige to unite the entire house. “Laurie likes to change up the décor—like she changes her sunroom seasonally and she’s always changing the soft décor, so having the neutral background was important,” says Kowalczyk.

Flatt’s favorite room is the all-season sunroom that overlooks the lake. The bright, sunny space has her stamp all over it with rustically-inspired finds, many of which are from Harvest Home in Pewaukee—one of Flatt’s top local shops. The vintage chair with flour sack-upholstered cushions from the Elkhorn Flea Market is a particular favorite of hers. The gas fireplace (another must-have for Flatt) adds coziness to the spot in the fall and winter.

“I’m out here every day. On weekends the girls and I are in here drinking our coffee and talking. And they like to study in here. It’s used a lot,” says Flatt.

Another gathering spot for the family is the kitchen with its eight-by-four-foot quartztopped island. Dark gray cabinetry underpins the island and provides a nice contrast to the white upper and lower cabinetry (all by Wood Specialties). A simple sleek white subway tile backsplash unites the space and a vintage-style Ferguson faucet and apron sink lend the kitchen farmhouse style—albeit with modern touches and amenities. Those contemporary luxuries include small prep garbage receptacles in the island for kitchen scraps, an oversized refrigerator and custom drawer organizers. Behind the kitchen wall is the butler’s pantry with more cabinetry, counter space and coffee bar.

Another much-loved area of Laurie’s is the spacious mudroom/laundry room in the corner of the house. There are cubbies next to the garage door for a convenient drop zone. The room has a quartztopped island that Laurie can fold laundry on and store cleaning supplies in. She even sits at the vintage desk in the corner, lights a candle and journals sometimes while waiting for her laundry to be done.

There’s no question that Flatt is a master of creating a Zen-like atmosphere. In the living room, quiet shades of gray, beige and white with pops of blush pink tie together the comfortable seating area with Wisteria furnishings. Built-in bookshelves hold mementos like the kids’ artwork and family photos. A coffee table crafted out of an old stable door (also found at the Elkhorn Flea Market) and fitted with legs adds vintage charm to the space. A floor-to-ceiling fieldstone fireplace signals that this is a place to be together in.

Off of the living room is the couple’s spacious master suite. The bedroom is masterfully outfitted in soft shades of blue with metallic accents in the decorative mirrors from Wisteria and nightstands.

The master bath is Flatt’s sanctuary and features dove gray cabinetry, a large soaking tub, standup shower and a small alcove with vanity that Laurie does her makeup in. Gorgeous tile from The Tile Shop outfits the space, and a glamorous light fixture from BBC Lighting adds some bling.

The kids have their own space in the home’s lower level. Daughters Claudia and Ella both have bedrooms and full bathrooms and a lounge area for hanging out. Flatt is planning on turning a third bedroom space into a bunk room for more guests.

Outside, the home has a beautiful upper deck and lower patio strung with café lights that gets used regularly. Two swings that were made by Mike’s dad Bob hang at the ready for end-of-day chats with her daughters. It doesn’t hurt both spots have a great view of the water.

Even if all five of the Flatts aren’t living in the close quarters of their 600-square-foot guest cottage anymore, Flatt loves the sense of togetherness her home provides. And Kowalczyk knows they achieved what they set out to do in the property.

“She wanted a relaxed, comfortable retreat, and I think that’s what she got,” says Kowalczyk. “It’s just a peaceful, serene place to be.”

Your Dream Home is Calling 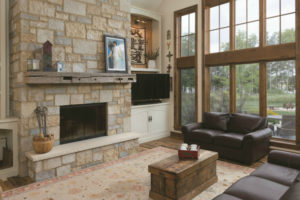 By Shayna Mace | Photography by Ryan Hainey Photography For Marcy and Jim Dunlap, the choice where to build their dream...
Copyright 2018 Nei-Turner Media Group
Back to top