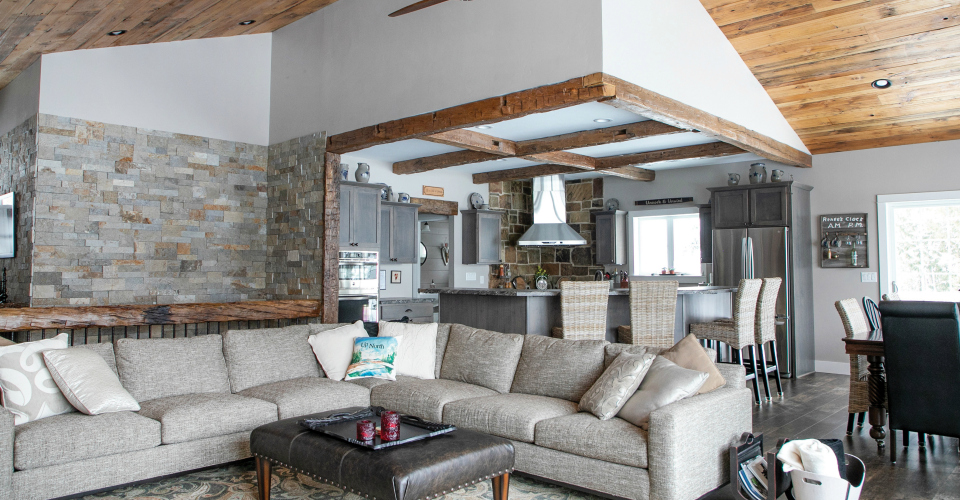 These days, a lake home is so much more than just an escape over the summer. For many Northwoods part-time residents, their vacation homes are becoming a year-round destination— hikes in the fall, snowmobiling and holidays in the winter, and enjoying the outdoors and the lakes in the spring and summer.

Such is the case for Renee and Jay Jepson’s second home on Pelican Lake in Antigo. Renee says the family is there weekly throughout the year, with extended stays over the summer. The couple and their two kids, Kayla and Jack, like that the home is just under a three-hour drive from their West Bend home.

“We’re up there as much as possible,” affirms Renee.

Their connection to the area started when Jay was just a boy, when he used to fish on Pelican Lake. It continued when Jay came up to the lake for years to visit friends—and then after Jay and Renee married, they bought their own cottage on the lake on their current property in 2002.

“It was a house that needed quite a bit of work, so we cleared the yard and fixed up the house for a few years to make it work for us—the way we live and play,” explains Jay. “We knew we weren’t going to keep the existing home forever as it needed a lot of repair. Then in about 2010 we decided we didn’t want to keep putting money in an older home, so we decided to design a newer home on the property and tear down the old one. In 2016 we tore down the old house and began to build our dream home.”

The couple wanted a home that could host guests comfortably, and be a respite from their busy day- to-day lives back at home.

“We’re very social, and do lots of things with a lot of people. It was important for us to create something that gave people privacy when they were staying with us, yet give us privacy,” says Renee. “Thus the guest bedrooms are downstairs and the master bedroom is on the main level. Because we entertain with other families, we also wanted to be sure we had an area to be together. The original home didn’t allow that, therefore we designed the upstairs family room and kitchen to be very open. We do a lot on the water and snowmobile a lot, and that gear takes up a lot of space. We built into the design a place for all of the equipment and gear. So we wanted to design something totally different than what we had.”

However, the family faced an immediate challenge upon the start of designing their home. Pelican Lake is a spring-fed lake, and some of those springs run through their property—so they had to work with Northwoods Excavating LLC, a local company, to ensure that the water was effectively managed.

“We had to make sure that we directed the water around the house,” says Jay. “The local excavator was able to get that done so we could build a nice home on the property that has a lot of water in front of it and to the side too.”

The couple chose Ripon-based Pollesch Construction to design and build the home. In the design, they wanted to marry touches of a traditional Northwoods home with a modern, contemporary feel—or, “nostalgic contemporary,” as Jay calls it.

Traditional accents are heavily used throughout—including in the stone fireplace surround (which also pops up in the kitchen), dark vinyl plank flooring, stacked-stone accent wall and reclaimed barn board used on the great room ceiling. Reclaimed barn beams were used in the kitchen, fireplace mantle and downstairs railing.

Using the reclaimed barn wood was a serious labor of love for the family. “[It] all came from the same barn that was local to where my parents lived,” says Renee. “A lot of work went into that project. The farm itself

dates back to 1892 and the [barn] was made mostly out of tamarack and fir from the surrounding land. Part of the barn had fallen over and the owner asked my dad if he wanted [some of the lumber]. We spent an entire summer transporting, sorting and stacking it; pulling all of the rusty nails out of it, cleaning the wood, then [sealing it] with polyurethane. Someone made a comment about the ceiling recently and my son said, ‘Yep, that’s the summer we did all of the wood work!’”

The couple effectively blended that classic cabin style with updated décor in the light gray wall color, mixed-material furnishings (like the fabric couch, leather ottoman and rattan accent chairs), gray-wash kitchen cabinets and white built-in bookshelves next to the fireplace.

“I wanted those white bookshelves because the things on display have a meaning or value to us of some sort, so I wanted a place to be able to see all of it,” says Renee.

But the memories aren’t just confined to upstairs. Step downstairs and the entire lower-level entertaining area is an homage to the family’s time on Pelican Lake—many of which started when Jack was just two years old (see images on pages 42 and 43). Framed photos of family and friends are in chronological order starting from left to right. Peppered in between the photos are decorated wooden paddles and toilet seats from friendly competitions during summer and winter “Olympics” the family held.

“On weekends when we needed something different to do, we’d occasionally create those events,” explains Renee. “We used boat paddles, blow-up mattresses, water balloons—whatever—we just wanted to do something fun with the kids. The upstairs of the old house didn’t have a bathroom, so that’s why we picked the toilet seats on the wall. The games were on a point system, and medals were awarded for first, second and third place. The toilet seats were chosen to be the ‘medals’ due to the lack of a bathroom. It’s odd, I know—but they were an important part of the Olympics! The winner was able to hang their seat the highest on a wall of the old house. The kids like seeing them and reminisce about the games. As the quote on the wall says, ‘We didn’t realize we were making memories, we just thought we were having fun.’”

Vintage water skis hang throughout the space too—including a pair used in the hanging light fixture over the pool table that a set of friends had custom-made for the Jepsons. Coincidentally, the type of ski used in the fixture was the first pair of skis Jay learned how to water-ski on, unbeknownst to their friends—another cool, personalized touch to the room.

Guests and family can also belly up to the bar made out of an actual old 19-foot-long ski boat for a drink or snack. Hanging pendant lamps that look like buoys hang above the bar for an extra-special nautical nod. More memorabilia hangs behind the bar of favorite places and family memories. Hand- written on the stairs behind the bar is the exact latitude and longitude of the home.

It’s a fitting touch to this special place that the family treasures year-round for decompressing from daily life, laughter and fun.

“Our daughter lives in South Korea now, but every time she comes home all she wants to do is get to the house up north and hang out—it’s established such strong memories for her. And our son has just grown up with [the house] being a part of his life,” says Renee. “We kind of let go of all of our responsibilities here with work, and it’s nice.” 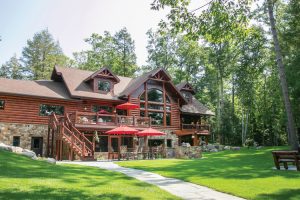 By Anne Morrissy | Photography by Shanna Wolf Bruce and Barb Gabrielse stood outside on a frigid winter day several...
Copyright 2018 Nei-Turner Media Group
Back to top