Small Kitchen Tweaks That Made a Big Improvement

Although Charlene Needles and her husband, Gene, had lived in Dallas, Texas, since 2000, Charlene, a Chicago native, missed the Midwest summers she spent in Lake Geneva in the Knollwood neighborhood.

“My husband said we should get our own place here so that we could have some Midwestern roots for the kids,” says Charlene.

In 2002, the family bought a striking architectural home in Lake Geneva’s north shore area. Although it was built in 1978, the property had a distinct midcentury modern vibe. The couple knew that the home had good bones but also agreed that eventually, they wanted to make changes.

Starting in 2014, the couple started chipping away at all of their to-dos, which included redoing and/or renovating all of the bathrooms, adding on a spacious 24-by-14-foot screened-in porch to the back of the home (crafted beautifully by Lowell Custom Homes), choosing new living room furnishings, refreshing all of the bedrooms’ décor, and eventually, revamping the kitchen.

For all of the projects, Charlene worked with Cindy Wilson of Cynthia B Wilson Interior Design and leaned heavily on Wilson’s design expertise. Wilson says they broke down the kitchen job in two phases: phase one included moving the existing kitchen island over eight inches to allow for more counter-height seating; removing a large, bulky bookcase and desk that separated the kitchen and living room; and hiring Timeless Flooring to stain the floors a gray wash throughout the first floor.

In phase two, Wilson and Charlene tackled taking out the imposing pantry that housed a microwave and convection oven to open up the entire space. Wilson suggested installing an upper cabinet there instead, surrounded on three sides with glass, to house the couple’s liquor and bar items.

“When you walked [into the kitchen] from our back stairs, it wasn’t very open. The big pantry was clunky. With glass on three sides of the cabinet—now—it gives an open feeling when you come into the kitchen. It sounds trivial, but it helped!” says Charlene.

Charlene chose a type of quartzite for her countertops called Taj Mahal (which is also one of Wilson’s favorite countertop materials to use), a handmade cream backsplash from Bella Tile & Stone and a new range and dishwasher. The pair worked with Natalie Spiniolas of Geneva Custom Cabinetry to install a new Galley Workstation sink (that comes with a plethora of accessories for cutting and food prep) and select new minimalist cabinet pulls, too. Finally, woven raffia textured wallpaper was selected for the eat-in area of the kitchen.

“With subtle touches like replacing the countertops, reworking some of the cabinetry and updating the tile, the entire attitude of the kitchen was transformed,” says Wilson.

“I love that we replaced the old gray Corian countertops with something light, because it really lightened it up,” says Charlene. “The sink is great, and now we can sit at our island—it’s more open for entertaining in here now. It just gives a calmer feeling.” 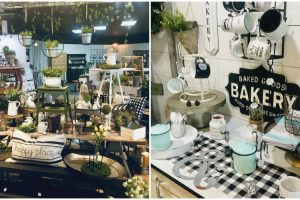 Deb Moore has always had an eye for repurposing old furniture and whipping up linens (like napkins and table runners) when...
Copyright 2018 Nei-Turner Media Group
Back to top