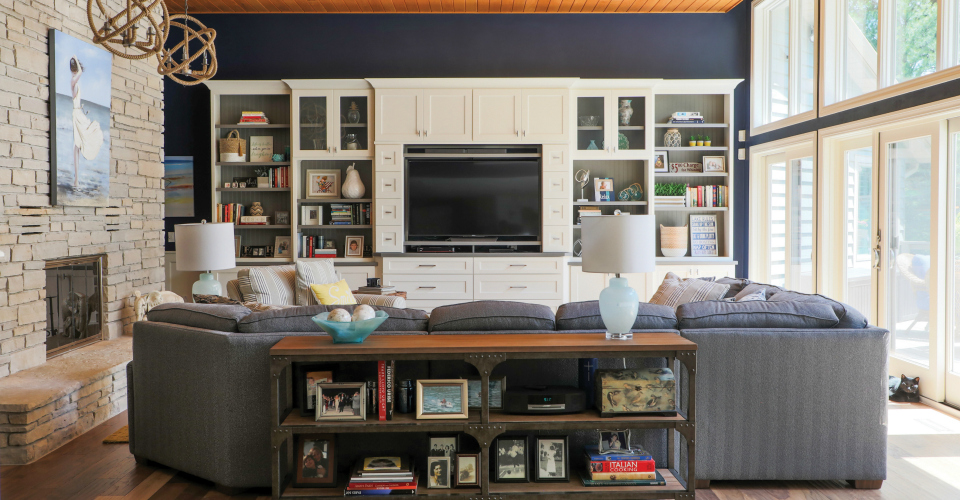 When Diana and James Costigan moved back to Wisconsin after living in Florida for 34 years, they welcomed Midwest life with open arms again. The couple had settled in Oconomowoc, just west of Waukesha, and after a few years started looking for a vacation home on a lake. But, they didn’t really know where they wanted to look.

“James knew he wanted a good lake with a lot of walleye, and we looked around Tomahawk and had settled on that’s where we’d be. But, we realized it was about an hour more than we wanted to drive [from Oconomowoc] so we kept looking and stumbled upon this home—and it’s paradise,” says Diana.

Located on Lake Du Bay South of Wausau, the lot has six acres and 330 feet of frontage. Diana says when they walked in the home in 2016 they liked the home’s footprint—and she knew she could put her stamp on the house.

“We just fell in love with it. The minute we walked in it, we knew it was our house,” says Diana.

The Costigans knew they wanted to remodel the home to bring it up to date, so they met with Bob Osowski of Premier Home Craftsman to design their new vision. The couple decided to open up the narrow gallery kitchen on the main level. Upstairs, they wanted to close one entrance off to the jack-and-jill bathroom that connected the two master bedrooms and reconfigure it into a large master bath. They also combined two closets to make one large, walk-in master closet (complete with built-in shelving).

The main floor, which is the showpiece of the home, is now one wide-open space, thanks to opening up the former galley kitchen. A brick fireplace flanks one wall in the living room (that the couple kept), and a large built-in bookcase (crafted and “masterfully executed” by Pete Swita of Swita Cabinetry, says Diana) holds court on another wall that houses their collection of books, mementos and photos of their five adult children and nine grandchildren. The wall facing the lake has floor-to-ceiling windows for the couple to enjoy the view.

Other thoughtful design details were incorporated, thanks to Diana’s interior design background. The couple removed the carpeting and replaced it with handsome walnut flooring. They also kept the existing cedar wood detail on the ceiling and chose to accent it by weaving in a navy blue wall behind the bookcase, selecting a blue Smith Brothers sectional and hanging two rope-accented pendants from Wayfair in front of the fireplace to punctuate Diana’s “coastal, lake-y” vibe she was going for. The painting on the fireplace was a gift from her daughter, Melissa and son-in-law, Tim.

Now that the kitchen seamlessly connects to the living room, Diana says this is her favorite spot in the house—thanks in no small part to the design expertise of Swita.

“Pete listened to everything that I wanted and put it all together for me. He did a magnificent job. I would say it’s the perfect kitchen for me, and I love everything about it. It’s great for entertaining and cooking, and there’s plenty of room for everybody to visit while meals are going on. And it never feels crowded!”

Diana says she wanted a large island that could accommodate family and guests, and her nine-by-seven-foot Cambria-topped island does the trick. She played with dark and light in the kitchen, opting for a light top and dark stained lower cabinets in the island. Her upper and lower perimeter custom cabinetry is painted Sherwin-Williams’ Dover White, and the surrounding Cambria countertops are a solid, dark gray color. She also loves the prep sink in the island for functionality, small coffee bar tucked around the corner from the kitchen and the teardrop-shaped pendant lights from BBC Lighting that hang above the island.

Another delightful part of the floor plan the couple loves is the cedar- paneled four-season sunroom, located off of the kitchen. It provides another relaxation space to view the couple’s bird feeders and the lake. “That’s where I have my coffee every morning,” says Diana.

When the family hosts larger get-togethers, their formal dining room, located off the home’s entryway, comes in handy. The couple made small tweaks in this room, opting to remove the walls that previously closed it off from the entryway, as well as add in traditional board-and- batten detail to lend gravitas to the space. Diana’s love of blue reigns supreme in here with the deep navy walls and zigzag rug from Wayfair. A farmhouse-style circular light fixture from BBC Lighting and a modern bird painting by friend Ray Gallo finishes off the room.

The home’s upper level is a sanctuary from the hustle and bustle of family lake life. Because the Costigans reconfigured the jack-and-jill bathroom into a master bathroom, they now have the room they need, and a spa-worthy master bathroom to boot. In the new space, marble flooring and the walk-in tiled shower complement the classic soaking tub. Gorgeous gray millwork adds a traditional, lived-in touch to the space. Diana’s love of coastal blues pops up again in the master bedroom bedding and wall color.

Now that the Costigans opted to make this their full-time abode this past June (and sold their Oconomowoc home), they couldn’t be happier with their new, full-time lake life.

“After living in Florida for as long as we did, I wanted to bring that coastal, lake vibe to this house—and I think we did,” says Diana. “It’s like a little utopia here right now, and we’re just so happy with it all.”

An Insider’s Guide to Furnishing a Home From Scratch

Shayna Mace is the editorial director of Lakeshore Living, a publication of Nei-Turner Media Group. 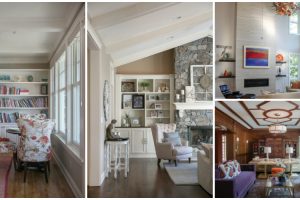 An Insider’s Guide to Furnishing a Home From Scratch

By Deanna Kane | Photography by Shanna Wolf Furnishing a home can be overwhelming, not to mention time-consuming and expensive....
Copyright 2018 Nei-Turner Media Group
Back to top