A Historic Geneva Lake Home Gets a 21st-Century Update 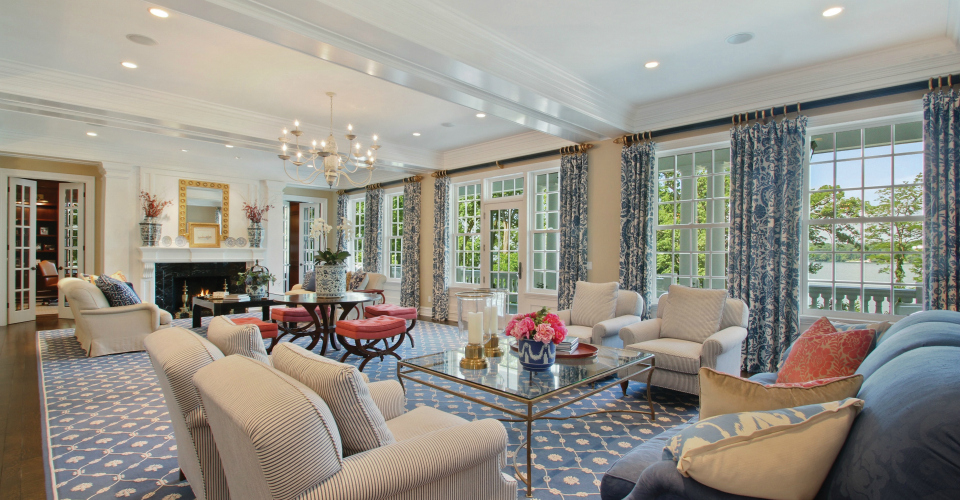 On the shores of Geneva Bay, slightly south of Flat Iron Park in Lake Geneva, you’ll find an elegant 13-bedroom Neoclassical mansion. The home’s white façade rises over the lake, a long veranda running across the length of the front, providing the perfect spot to catch the summer breezes and admire beautiful views of the lake and the old-growth trees that give the property its name: Oak Lodge. It is a name that dates back longer than possibly any other property on the lake.

Oak Lodge’s current homeowner works in financial services and lives on Chicago’s North Shore with his wife and six children. They kept a boat in Fontana for about eight years, so they knew the area well. While in the Geneva Lake area in the early 2000’s, they first spotted the property and fell in love with the look of the historic home as well as its seclusion and close proximity to town. However, at that time, the home had not been significantly updated in decades and was showing signs of major wear and tear.

“When we first bought Oak Lodge in 2007, our intention was to renovate it,” the homeowner explains. They hired Archimage Architects, Ltd., a Chicago-based architecture firm, to develop a renovation plan. However, when the architects saw the state of the home, including the crumbling 100-year-old stone foundation, they recommended that instead of a renovation, the homeowners opt for an historic reconstruction of the home. “We loved the look of the original home, so we tried to rebuild it as closely as possible while updating it for modern use,” the homeowner continues. “From the lake, we wanted it to look exactly the same.”

With this primary goal of keeping the house as close to its original look as possible, the homeowners did make some updates. “We enclosed the porte-cochère into a family room, moved the kitchen closer to the front of the house and expanded it, and broke up the ballroom-sized main room into a living room, dining room and office,” the homeowner explains. “But we rebuilt it on almost exactly the same footprint.”

One aspect of Oak Lodge that the homeowners were eager to replicate was the extensive hand-carved woodwork throughout the home. To achieve this look, they hired a team of Amish craftsmen from Indiana who worked in Lake Geneva for a few months to fabricate the mantels, stairs, paneling, moldings, window frames and other details throughout the home’s 13,000 square feet.

The version of Oak Lodge that the homeowners loved so much and were working so diligently to rebuild was in fact the home’s second act. The first Oak Lodge was one of the earliest summer homes on Geneva Lake and dated to around 1873, when a lumber dealer and former Chicago alderman named Allen C. Calkins bought the lot and built a rustic, 10-room cottage on the property to enjoy with his family. Following Calkins’ death in 1899, Oak Lodge was sold to George D. Barnard, a lithographer from St. Louis. Barnard was responsible for turning the rustic cottage into an opulent summer mansion, a feat he achieved by building a large addition to Oak Lodge, establishing the general look it retains to this day.

To do this, Barnard removed the cottage’s extensive verandas and built a new wing on the home’s lake side, which included among its many rooms a 50-foot-long living room with a large brick fireplace, and a formal dining room with beamed ceilings and elegant woodwork. Upstairs, the layout included a master bedroom with a well-stocked library adjacent. The oldest part of the house (Calkins’s former cottage) was converted for use as service quarters and included a huge, walk-in icebox with hammered tin walls.

In 1919, after two summers of renting from Barnard, Jeannette and Daniel S. Peterkin, Sr. bought Oak Lodge to enjoy with their children. Peterkin was a top executive at Morton Salt, where he would eventually become president of the company in 1930. The Peterkins made some changes to the home, enclosing the upstairs sleeping porch to include a nursery and a long suite of guest rooms with private or jack-and-jill baths. They also glassed in a side porch to create a sun room. Finally, they installed cutting-edge technology for the era: an air conditioning system, which their grandson Bill Hunt says was “reputed to be one of the earliest air conditioning systems in the area.”

Following Peterkin’s death in 1941, daughter Jeannette and her husband, William O. Hunt, inherited Oak Lodge. The Hunt’s children, Bill Hunt and Jean (Hunt) Van Nice spent every summer and many winter weekends at Oak Lodge growing up, and between them they share many memories of their time at Geneva Lake. “My parents would have house parties on the weekends and it was a pretty relaxed place … they’d make use of the tennis court, or take their friends out sailing or on the motorboats,” Hunt remembers. “As kids, we used to put on theatricals. Between the living and the dining room was an arcade with columns and a big curtain, and that was the scene of them.”

Van Nice fondly remembers her childhood time exploring the attic, which was full of treasures inherited from her grandparents or collected on her parents’ travels. “There was a room at the end [of the attic] that had been furnished,” she remembers. “It had a lot of interesting things: swords and helmets and hats and wooden toys and sailboats.” Her mother loved flowers, and Van Nice also spent many hours in Oak Lodge’s greenhouse, gardens and flower fields helping her mother pick, paint and arrange flowers. The Hunts owned the home for five decades, until William O. Hunt’s death in 1994.

By 2001, the property was subdivided and the surrounding lots were developed. Oak Lodge was in disrepair from years of deferred maintenance. The current homeowners bought the home (now sited on 3.5 acres of land with 210 feet of lake frontage) from the development company in 2007 and completed its historic reconstruction in 2009. Other upgrades they added during the reconstruction include a fully finished first level which contains a rec room, exercise room, bathrooms/changing rooms, and a second full kitchen, all of which open onto the terrace and swimming pool. There is also a sizable catering kitchen with dumbwaiter and elevator access to the main floor. Upstairs, the master bedroom and guest suites adhere to the design of the previous Oak Lodge with an enfilade of guest suites facing the lake. The homeowner says they frequently host large groups of overnight guests. “I think the most we’ve had at once is 38,” he laughs.

Today, Oak Lodge retains a look of historic grandeur but stands as a fully modern luxury home with all the latest amenities. Despite its many transformations and updates throughout the years, one thing has not changed since the first Oak Lodge was built here in 1873: the unparalleled view of Geneva Bay. “We never get tired of this view,” the homeowner says. Now more than ever, Oak Lodge projects an unmatched elegance, a timelessness deeply informed by a long sense of tradition on Geneva Lake, and a level of comfort appreciated by everyone who passes through its doors.

Style: What to Wear for Your Most Stylish Fall 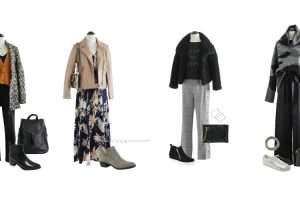 Style: What to Wear for Your Most Stylish Fall