Modern Muse on the Water 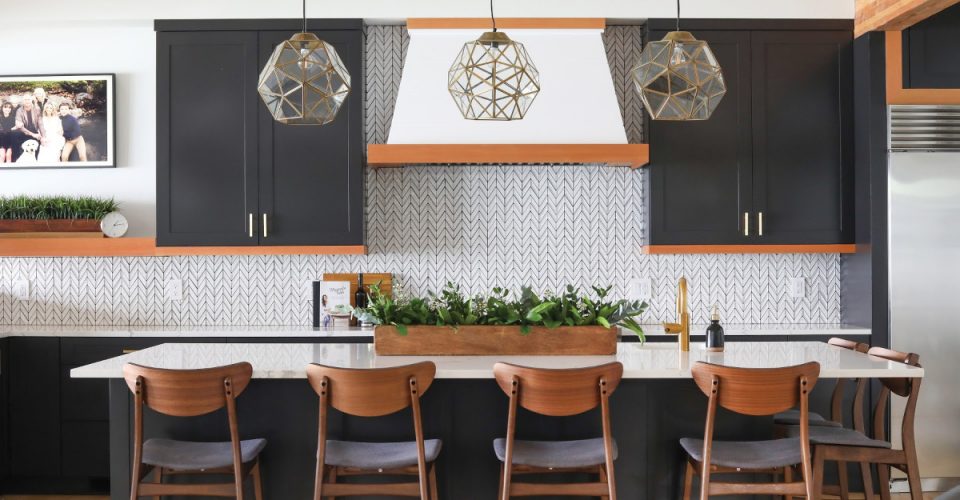 For several years, Megan and Andy Walker lived in a bit of limbo. Andy ran a software company on the East Coast and commuted back and forth to Wisconsin. Then his job took him to Washington, D.C., for a few years, and then, Chicago. All the while, he traveled for work and Megan and their four kids lived in a home they purchased on Lake Kegonsa in 2011. Adding to the family’s busyness was the fact that a year or two after moving in, the couple chose to remodel the nearly 30-year-old property and replace all of the mechanicals. “After that, we were done—and it was a beautiful house. We really did love it,” says Andy.

One night while out to dinner, the couple was approached by a visitor from Illinois who told them they liked their house, and asked if it was for sale.

“I jokingly said, for the right price, everything’s for sale!” says Andy. “And, he took me up on it.”

The family moved in with Megan’s parents in Stoughton while they scouted for another home off the water to buy, with the plan of building another home on the lake again—when the right property came up for sale. Luckily, the Walkers found a pie- shaped lake lot relatively quickly that had a cottage on it, and they snapped it up. Next, they had to design their dream home.

The couple worked with Tyler Hawryluk of Calgary, Canada-based THAD Residential Design Studio on the “modern, yet homey” feel they wanted in their floor plan, general design and even exterior renderings.

“We sent him pictures of our old house and told him that we loved that house, but I think we went a little too far on how modern we made it. [So] we wanted this one to feel a little bit more cozy, but at the same time modern, and blend those styles,” says Andy.

In the design, the Walkers wanted the kitchen to be the heart of the home and ensure that the main floor was open and conducive to hosting guests, “because at the end of the day, that’s where everybody wants to be,” explains Andy.

Once the plans were finalized, Megan and Andy weren’t afraid to roll up their sleeves to do the work—in fact, they acted as the general contractors—hiring everyone from Fuller Excavating to tear down the old cottage, to working with Kyle Kane of DK Design Build to oversee laying the foundation and the framing of the home. They also worked with Dream House Dream Kitchens on the main floor’s layout, cabinetry and other elements throughout the home.

In the open floor plan, each space blends seamlessly with the next—which also presented some design challenges, admits Andy. One design trick the couple used was utilizing tile flooring in the entryway and the outdoor room that faces the lake to demarcate those spaces. The couple also used Douglas Fir ceiling beam accents to help ground the space and subtly emphasize room divisions.

“What Megan did really well was use those [ceiling] beams as an artificial separation in the house. [So in the entryway] the herringbone tile stops at one of the beams and then it transitions into hardwood even though the beam is on the ceiling—not on the floor,” says Andy.

The couple wove in Douglas Fir touches throughout the entire home— including in contrasting trim on the inky black kitchen cabinetry. Quartz countertops in the kitchen provide a clean, refreshing break to the dark cabinetry and gold faucets add a gleamy touch to the space. Two dishwashers, a 48-inch-wide Wolf cooktop (plus searing station and griddle) and plenty of prep area mean the space can easily accommodate the family of six plus guests anytime.

The dining area is another special spot, outfitted with a table custom-made by Andy’s dad, a retired woodworking teacher. The furniture piece against the wall was crafted by Dream House Dream Kitchens and houses a cooler drawer and icemaker on the left, and a wine fridge on the right—all cleverly disguised as a buffet. “I really think they did a good job,” affirms Andy.

As a busy family of six, Megan and Andy also needed a respite in their home to retreat from the daily grind. Their master suite takes up about two-thirds of the main level, which includes the bedroom, a master bath, his-and-hers closets, and Andy’s office. “It feels like a mini apartment, to be honest,” says Andy.

Jerry Schmidt, director of design at Dream House Dream Kitchens, praises the Walker’s unique vision and painstaking detail in the home. “I would say the fact that you can see straight through the house end to end is a cool feature,” he says. “It’s a fun house, because you feel like you’re walking on the water, in a sense. It really pulls you toward the lake. It has the right window heights and lines—it’s a great formula.”

Homeowners Megan and Andy Walker designed the entryway around a mahogany door by the Pivot Door Company that swings in the middle instead of hanging from hinges. “The front door is a great piece that everyone always comments on,” says Andy. It was Megan’s idea to wallpaper the ceiling in the front entryway for an unexpected, contemporary touch. Black herringbone tile defines the space.

heart of the home

The white chevron tile backsplash with gray grout dresses up the kitchen and complements the simple yet chic Shaker-style kitchen cabinets. The couple chose Douglas Fir accents from Brunsell Lumber & Millwork to kick up the cabinetry. Jewel- like pendant lamps from Steinhafel’s hang over the kitchen island.

The family’s Double Doodle Gunner often lounges in the entryway.

The kitchen has a waterfall edge peninsula that can seat four, in addition to the six people the kitchen island can accommodate. “It was really important for [us] that if we were having people over, that everybody could be in the kitchen eating and drinking and not feel like they have to stand,” says Andy.

The family room has a comfortable, casual vibe with a mix of leather, wood and metal accents. “We spent several days in Chicago sitting on furniture—we wanted something that was going to be comfortable and inviting. This couch is from Room & Board,” says Megan.

The “outdoor room” as Andy calls it, faces the lake. It has two sets of NanaWalls, which are foldable glass walls. One set is on the home’s exterior, and another set separates the outdoor room from the dining room. Each set of walls is also equipped with screens, so the room can become a screened- in porch or completely open to the outside. When both walls are open, lake breezes waft into the home. The tiled floor adds durability for when the room is open to the outside, and hearty West Elm furniture can withstand temperature swings.

The Walker’s double- sided vanity was a one-of-kind request, says Dream House Dream Kitchen’s Jerry Schmidt. But once the team saw how
it turned out, they were sold. Andy’s dad custom-welded and powder-coated the mirror that hangs from the ceiling.

The spacious rectangular tub was a must-have for Megan. Matte black Brizo plumbing fixtures are used throughout the master bath.

Andy ordered an online kit and assembled the wine rack underneath the stairs himself in the temperature-controlled wine cellar.

The couple’s two teenagers share this upstairs bathroom. Each kid has their own vanity for getting ready and storing their items.

This home was featured in the Madison: Spring 2020 issue. For more photos of featured Madison homes, visit the Madison Gallery page.

Pamper Your Pet With These Must-Haves 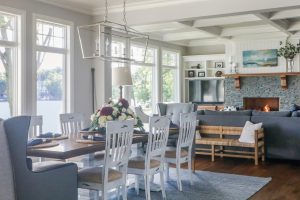 During the summer, the Wisconsin Dells area transforms into a bustling destination for tourists visiting from near and far....
Copyright 2018 Nei-Turner Media Group
Back to top