Patrick Gries grew up spending summers on Delavan Lake, staying in a family cottage no bigger than a two-car garage packed with 10 siblings. It was so noisy inside that his mom nicknamed it The Chatterbox.

Though The Chatterbox isn’t around anymore — one of Patrick’s brothers bought it and built a new home on the land — pieces of it live on at his and wife Patty’s current vacation home on Delavan Lake. The couple preserved little touches from the original cottage like the white wicker chairs, and a rustic Chatterbox sign hangs in the screened-in porch.

FROM OUTDATED COTTAGE TO MODERN DWELLING

The Gries family, who live in Illinois and have three grown children, bought their vacation home 11 years ago and decided to renovate it before their daughter, Molly, got married — when they knew family and friends would be over. When the couple started construction in 2018, the list for the remodel was a large undertaking, but still relatively short: finish the basement, redo the kitchen and replace the windows and siding.

The historic Foursquare-style house — a boxy architecture trend that was popularized in the late 1800s and early 1900s — was old, and needed sprucing up. But once contractors started their work, they found a host of problems. Mummified beehives were found in the walls and the windows and doors didn’t have proper structural support — so they ended up gutting much of the house to reorganize the layout, and added more bathrooms and a bedroom.

“It was a lot bigger project … than we initially thought,” he says.

The end result rendered the interior and exterior of the home nearly unrecognizable. Now, the abode has a new lease on life with an open concept floor plan and a coastal, Nantucket style layered with navys, grays and reds. Chris Stebnitz, owner of Stebnitz Builders, says his team has done a lot of work around Walworth County, but the Gries home was certainly a grand project, namely, because they raised the house so the basement could function better for their family.

Prior to the renovation, the basement was a cellar with poor ventilation on the backside of the home, facing the lake. Now it’s a family oasis with 1,800 square feet of living space, including a bedroom, bathroom, kitchenette, laundry area, recreation room and a stunning fireplace designed by Jeff Auberger of Stebnitz Builders. Plus, the family can walk right out to the backyard and enjoy the fire pit or hop in the hot tub.

“When it comes to lake homes, I would say the majority of people are talking to us about design,” Stebnitz says. “They’re looking for more space and they want it to be functional. We used the same footprint [in the Gries home], but it’s … more efficient.”

Aside from the basement, the biggest transformation was the kitchen. Patrick says the old kitchen was essentially a porch slab that was an add-on from the home’s original summer kitchen. It’s now modern and stately with big swaths of subway tile backsplash and white cabinetry that extends to the ceiling with trim added by Stebnitz, giving the space a completely custom look. Oh, and we can’t forget that island. It’s one of Patty’s favorite features.

“I’ve got this 8-foot by 41/2-foot island that looks straight out to the water, and I can do dishes here,” she says. “I love to cook, and [now] I’m part of the whole group whereas, before, the kitchen was in the back area of the house.”

TOUCHES OF OLD AND NEW

Though the house looks brand new, some of its special moments are in the vintage furnishings. The built-in china cabinets in the dining room add warmth to the main floor living area and are original to the house, built by the second owner, Patrick says. Stebnitz added trim to the cabinets, a small detail that makes the built-ins really pop as a three-dimensional focal point against the pale wall.

Patrick refinishes furniture as a hobby and has preserved heirloom bed frames, dressers and chairs from his grandparents and parents. These little pieces of family history are dotted throughout the home in bedrooms and living spaces. It’s these elements that make the house sing and feel unique to the Gries family.

This fall, when their daughter gets married, the Gries will host a pre-wedding waterskiing party at the home. It’s one of the Gries’ favorite activities, and it goes back to why they bought the house more than a decade ago. The first time they saw the property, their daughter was teaching her cousin how to waterski on the lake when she said, “Dad, I like this house. We should buy it.” That was in August 2009, Patrick says, and they closed on the house that December.

During the spring and summer, Patrick and Patty come to the Delavan Lake house just about every week, making the hour or so drive from their home in Illinois. It’s truly a respite and the lakefront house they’ve always wanted.

“Our favorite thing is to go on the pier and watch the sunsets,” Patty says. “The south shore has the most beautiful sunsets, and it’s just absolutely gorgeous. We were watching it last night and there’s just nothing like it.”

Prior to the remodel, the living room, dining room and kitchen were cordoned off with walls, but now the family enjoys an open concept. Throughout the house, old-meets-new touches are sprinkled throughout, like the refinished wood rocking chair in the living room that belonged to Patrick Gries’ father.

The kitchen used to be in the back of the house and felt closed off from the living spaces. Now, meals can be prepped while the Gries mingle with guests.

The dining room exemplifies the original charm of the lakefront home. The oak built-ins were installed by the second owner of the home and were refreshed with matching trim that make them pop. The light fixture is also original to the house. Patty insisted on keeping it, and Patrick refinished it with a little paint and varnish to make it look anew.

The barn door leading into the pantry softens the modern renovation.

The Gries’ master bathroom was gutted and the layout rearranged. Now, it feels light and bright with the help of marble countertops. Sleek tile wraps the walls and was selected for its likeness to driftwood. The master bedroom has traditional charm with furniture that was crafted or refinished by Patrick. He made their bed frame out of old doors and crafted midcentury modern nightstands to match. The chest at the foot of the bed was falling apart before he refinished it.

A Place to Gather

The screened-in porch is now the perfect place to sit with a cup of coffee, outfitted with wicker chairs and a table that came from Patrick’s childhood cottage, and original wood flooring. Previously, the space was a hallway used for storage.

The home was lifted to bring the lakeside portion of the basement to ground level. The basement was remodeled to include a bedroom, bathroom, kitchenette and entertainment and lounging space. When the house was lifted to renovate the basement, a bump-out was added to match the architecture of the main floor.

A Perfect Fit on Geneva Lake

Where Architecture and Artful Spaces Meet 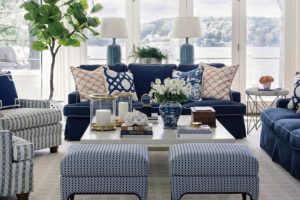 A Perfect Fit on Geneva Lake

It’s a common story in Lake Geneva: Once you visit, it’s hard to let this lake town go. Such was the case for Michelle...
Copyright 2018 Nei-Turner Media Group
Back to top