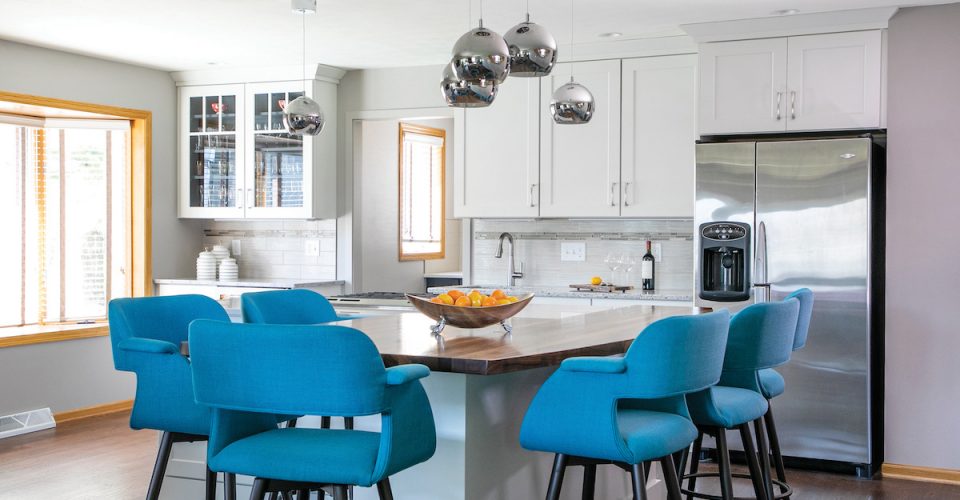 When Joy and Stuart Geenen moved into their home on Madison’s west side 20 years ago, they were thrilled to be in their desired neighborhood, and they loved the home. It had enough room for their son, Clay; daughter, Sophia; and dog, Yadi.

However, the Geenens had to contend with an eyesore from the outset: a four-sided fireplace that partially separated the kitchen and family room. Visually, it wasn’t attractive, and worse, it took up quite a bit of space in the kitchen that could’ve been used to expand its footprint.

The kitchen’s flow also didn’t work because it centered around a small island, “and you couldn’t really cook or work because everything was too close together,” says Joy. “It was just a very bad layout.”

Joy explains, “[We knew] we loved this house, but that fireplace had to go!”

The couple met with various interior designers over the years to reimagine their kitchen and family room, but none of the proposed plans quite hit the mark for the family.

“It took us 20 years to figure out what to do with the fireplace, because we kept hitting roadblocks of replacing the ceiling if it came out, or redoing the floor or redesigning the kitchen. We didn’t know where to go next.”

Finally in the fall of 2019, Joy and Stuart met with designer and general contractor Deb Corning and interior designer Alana Barerra of DC Interiors & Renovations to revamp their main floor once and for all. This time, the couple loved the plans put forth by Corning and Barrera, which involved taking out the fireplace (of course) and reconfiguring the kitchen’s layout. But what really sold the Geenens was the addition of a scullery that serves as an expanded pantry and work area — something they never dreamed of adding in their kitchen.

The three-month process was intense, and the couple was without a working kitchen during that time. First, a crew removed the fireplace. From there, all of the carpeting on the main floor was ripped out, and replaced with wood flooring. Then, all of the wood flooring was stained to match, uniting the kitchen, family room and dining room.

Corning’s plans called for walling off part of the kitchen to devote square footage to the new scullery area — which was possible because the family gained square footage in the kitchen with the removal of the fireplace. (Win-win.)

The couple opted for Shaker-style cabinetry that reaches the ceiling by the Kitchen Ideas Center, beautiful quartz countertops throughout from The Granite Shop of Madison, Mercury glass-like globe pendant lights from Madison Lighting and teal and black midcentury modern stools from Rubin’s that surround the kitchen island.

The rest of the main floor was redecorated to match the kitchen’s new contemporary look. The kitchen and family room were painted a soft white shade (as opposed to a cool white) to play off of the warmth of the oak trim that’s still throughout the house. New furnishings and artwork were purchased for the family and dining rooms to echo the white, teal, gray and blue color scheme. It all ties together perfectly and embodies the family’s classic taste, with a contemporary twist.

“We’ve lived in the space a while now, and there really isn’t anything we’d change. We just love walking into the space every day,” says Joy. “It just feels good to have a nice, fresh space.”

The original kitchen island was tiny and cramped the flow of the space. The new, larger island is a lot more functional.

The dishwasher, microwave and another sink are all tucked away in the scullery behind the wine fridge. It serves as an ideal spot for meal clean up and storage, plus, the navy cabinetry adds a pop of the unexpected.

Before, the Geenen’s main floor had a darker color scheme and a fireplace that separated the kitchen and family room. Now, it’s light and bright and the rooms seamlessly flow together.

With newly painted walls and stained floors, plus a new throw rug and artwork, the Geenen’s dining room looks totally different from its dated past. Chairs from Rubin’s, a pendant light from Madison Lighting and artwork from Décor (Corning’s home accessories shop), was also peppered in.

The Chef Behind Belfre Kitchen Shares Recipes for At-Home Entertaining 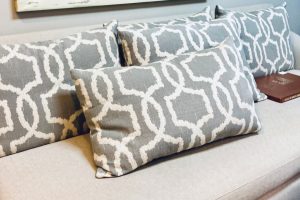 By Shayna Mace For Katie Guindon, owner of Hartland’s designXchange, buying furnishings and décor secondhand has been...
Copyright 2018 Nei-Turner Media Group
Back to top