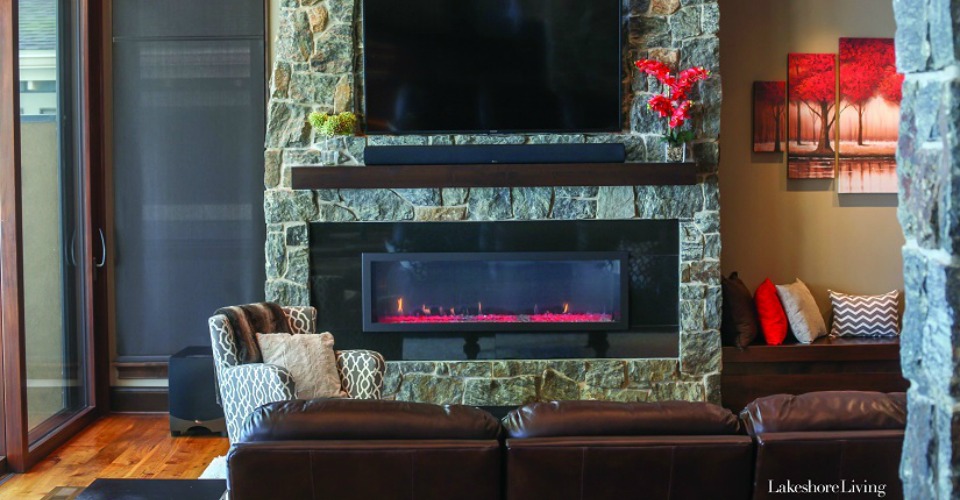 By Shelby Deering | Photography by Chris Joyner and Shanna Wolf

Rob and Jessica Bour undoubtedly lead eventful lives. They both work as physicians, filling slivers of free time with training for races, volunteering and planning get-togethers with neighbors. During their search for a dwelling that provided tranquility and modern conveniences in equal parts, they discovered a 5,500-square-foot Lake Waubesa home that was on the market.

“The wood and the stone details inside, with the view of the lake on the outside, makes it feel like a vacation getaway every time we come home from work,” says Jessica.

MAKING IT THEIR OWN

In June 2015, the couple moved in and started a large-scale remodeling project—finishing the lower level. The rest of the home had already been completed for a previous owner by general contractor 1848 Construction, Inc. and residential designer Mark Udvari-Solner. The Bours contacted his firm, udvari-solner design company, to finish the lower level and complete work on the house.

“I was fortunate that they reached out to me to continue the harmony of the project,” says Udvari-Solner. “I brought the builder [1848 Construction, Inc.] back on board, so there was some continuity with the previous team.”

Jessica describes the lower level as “devoted to fun,” saying, “There is no living space down there—just rooms where we can spend our time doing the things we love without having to leave our home.”

After nine months of work, the lower level was completed, featuring a bar inspired by pubs that the couple visited in England, a yoga space, a spa room, a home theater and even a music room where Rob can play the drums. The couple is in the process of adding a wine cellar as well.

Rob says that he and Jessica were “heavily involved” in the design process of the lower level. On his computer, he even created 3-D models of the home theater to “map out the geometry of where everything was going to be.”

Udvari-Solner says, “They were very comfortable bringing me in for ideas. I think they relied on my skills and my context to make sure what was being done was done well.”

The décor of the home takes a small step back to make the design the focal point. “It’s not furniture-centric. It’s architecture-centric. And I like it that way,” says Rob.

And the architecture of the residence is truly a thing to behold. Describing the home as having a “semi timber frame,” Udvari-Solner implemented striking, sturdy Douglas Fir beams to create the feel of a lodge.

“Everything from the stairs forward is true timber-frame construction. About a third of the house is timber frame,” explains Udvari-Solner. The timbers, which add a rustic touch, beautifully blend with the home’s contemporary elements.

Although there are cabin influences in the home, it contains plenty of modern-day bells and whistles. Rob likes the fact that it’s a “smart house” in which the lighting, stereos and TVs are all controlled via their phones and tablets. The master bath contains an offset bar area, complete with a marble countertop and fridge made for late-night snacking. The master shower, with steam and rain shower options, has heated floors and a heated bench. There’s even an elevator in the home.

But the most stunning attribute of the home is the access provided to sweeping lake views.

When asked about what he loves most about his home, Rob quips, “It’s gotta be the view, right?”

Featuring floor-to-ceiling lift and slide doors, the home brings the outside in through glass panels that can be opened and closed with ease.

“Everything lakeside from the lower level all the way to the second story is basically five-foot lift and slide mahogany panel systems. They really maximize the view and the interaction with the outdoors,” says Udvari-Solner. He adds that there are “very few of those systems in place in Wisconsin.”

Udvari-Solner adds that he designed the home to “maximize the view of the water.”

“When you’re in the living room, you’re really not looking at the neighbors. Getting the views of Lake Waubesa is really the focus,” he says.

It makes sense that the couple chose a house that seamlessly brings in the outdoors. The two prefer lake living and previously resided on Lake Kegonsa and Lake Champlain in Burlington, Vermont before moving to their current home. They love to cruise the lake in what Rob calls a “kayak/ sailboat hybrid,” going through underpasses to travel from lake to lake.

“We have seen bald eagles perched on the trees in our backyard, which makes it feel even more as though we are on a retreat,” says Jessica.

Jessica says, “The architectural and design details, such as the stone fireplace, the arched entryways, vaulted ceilings with wood beams and the use of lighting to highlight these features were the first things that made me fall in love with the house.”

Many of those favorite details in the home are made of natural materials. Udvari-Solner enjoys the fact that the lakeside environment is represented throughout the home.

“Outside materials are brought in internally. It was one of the design objectives on my end that I’m proud of,” he says.

When visitors walk into the home, they are greeted by a curved stone wall that leads to the kitchen and the rest of the main level.

“You’re hit with an awesome view of the lake,” says Udvari-Solner.

The stone spotlighted throughout the home is a “natural product” that Udvari-Solner describes as “a blend that we handpicked” that came from the West Coast.

“We worked hard to find something that looked like it belonged and also reflected the lake elements from the outside. We worked to find natural stone, not an imitation stone,” he explains.

Walnut floors complement the 14-foot-tall alder doors, specifically designed for the home. With arched tops and massive 10-inch bases, the craftsman doors have plenty of heft and certainly make a visual impact. Udvari-Solner says, “What I love about that particular home, when you come in, you get a sense of, ‘This is real walnut flooring’ or, ‘These are real wood doors.’ I think the interior stone elements bring a sense of warmth as well.”

Jessica describes the home as a “rustic cabin on a grander scale,” one that lends itself to doing yoga, making a bonfire for two or whipping up a favorite dish, buffalo mac ‘n’ cheese, in the gourmet kitchen.

But they equally love inviting friends over for cozy gatherings, like poker nights or cocktail parties.

“This house can be intimate for two, but it can also accommodate 50 people quickly,” says Udvari-Solner.

Jessica notes that they particularly enjoy inviting their neighbors to their home.

“After we moved in, we found the neighborhood to be extremely welcoming and we developed close friendships with our neighbors in a short amount of time. It is how I feel a neighborhood should be,” she says.

With its mix of natural elements, effortless amenities and little luxuries, this home is what a lakeside retreat should be, too. 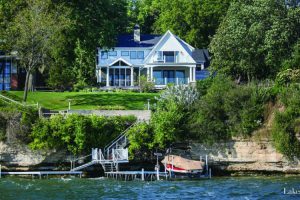