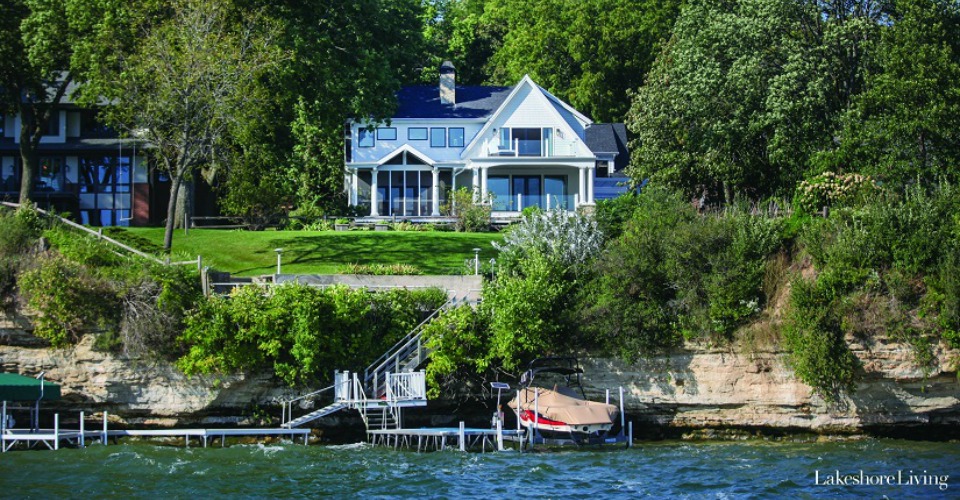 Patrick and Kate Heaney longed to live in Maple Bluff. They felt the village was a warm and welcoming community, and they appreciated its beautiful parks and wealth of events. And, of course, there was Lake Mendota, a huge draw. But despite years of looking at available homes—ﬁrst from their downtown nest in downtown’s Marina Condominiums, then from their home in Bishops Bay—nothing seemed like a ﬁt.

But, the Heaneys felt the water calling to them. Patrick had grown up in Neenah near Lake Winnebago and loves to sail; Kate was raised in a small Alaskan town perched on the ocean. The couple needed to be on the water. They couldn’t wait any longer. So they sold their home and hoped for the best.

There was one home for sale in Maple Bluff at the time that caught their eye. The home was set on a long, narrow lot right on the lake and had 100 feet of frontage. “We loved the property,” says Kate. “It was gorgeous.” But the 1960s-era ranch didn’t suit their family or style. Its kitchen was in the middle of the house, for one thing, with the dining room in back, and neither offered a lake view. There was also no mud room or connection to the garage.

More problematic, Kate says, was that “we had no good vision for what the house could become.” The couple was about to pass on it when, on a whim, they invited Andrew Braman-Wanek to the home for a look. Braman-Wanek, architect and owner of Ginkgo House Architecture, had previously worked with the two during their yearslong Maple Bluff search.

Unlike the Heaneys, BramanWanek saw a lot of potential in the single-story home. “It had light and a lake view,” he says, two enormous plusses. “It was also set up pretty well so that you could add on a second story and give them the extra space they needed.” Buoyed by Braman-Wanek’s vision, the Heaneys were soon the home’s new owners, and their dream of a lakeside home in Maple Bluff had come true. Now they just needed to do a little work.

The Heaneys spent the next 15 months on their home’s rebuild, working with Scott Poulson of Poulson Enterprises, Inc., Braman-Wanek and interior designer Barry Avery, owner of Fontaine. The original 6,800-square-foot structure was torn down save for three walls in order to create a two-story, 9,100-square-foot abode with five bedrooms, six full bathrooms and a lake view from nearly every room.

Outside, the home’s brand-new white, shingle-style facade received character from neo-classical elements such as columns, plus a steeply pitched roof punctuated with dormers. Cinnamon and gray split-face natural limestone covers its lower portion, providing warmth and texture, while the front door is painted a cheery, eye-popping Sharp Cheddar by Benjamin Moore. A center-set knob, handmade to order by SA Baxter, an architectural hardware company, completes the fetching look.

Inside, the kitchen serves as the nerve center of the home, as Patrick and Kate both love to cook and entertain. Spacious and airy, it features amenities such as a steam oven and Wolf gas range with griddle. “The griddle has been our best investment,” Kate says, noting Patrick was the one who insisted on it. “I can be cooking eggs and bacon for one kid on it here, then have pancakes for another kid over there. And then I can have a pot boiling. I also use it to reheat food and even cook frozen foods. You can use it for anything, really.”

Design-wise, the kitchen is bright with clean lines. Stainless steel appliances are set amid snow-white cabinetry, breaking up the monochromatic look, while three large-scale brass pendants hang over the island, providing a warm, golden glow. The pendants are one of designer Avery’s favorite touches.

While the modern fixtures are a bit of a contrast in the Heaneys’ more traditionally styled kitchen, and their finish doesn’t match those in the rest of the kitchen, that’s what makes them so striking, Avery says. “It’s all about mixing finishes in the proper way. They’re just wonderful.”

Although Avery selected the kitchen pendants, he says Kate was instrumental in the home’s interior design. “I had a vision,” she says. “I knew what my aesthetic was. But I needed the support and confidence [from Avery] that it would all make sense together.”

So for about nine months the two searched for design ideas as well as specific items—everything from furnishings and floor coverings to tile and hardware—collaborating to create a home reflecting the family’s warmth, fun and whimsy. The end result is a look Avery dubs both “hippie-chic” and “rock ‘n’ roll glam.” A good example is the living room, one of Kate’s favorite spots.

The room is set in the back of the home, overlooking the lake. Its ceiling is covered in bold Porter Teleo wallpaper. The paper was handmade in Japan and the contemporary pattern was painted onto the paper in the U.S. Elegant draperies softly frame the windows, while the furniture includes fluffy Mongolian lamb-covered chairs and a striking pair of nesting black-andwhite striped coffee tables. A contemporary print from Tandem Press, a local outfit affiliated with UW-Madison’s art department, hangs over the room’s black gas fireplace.

“We did really dressy draperies and drapery hardware, then pulled that dressiness down with the use of textured fabrics,” Avery explains. An organic yet classy feel is the result—and is just what the two hoped to achieve.

In the den, Kate wanted to create a darker, more intimate feel, so she opted to cover the walls in a green velvet fabric. “I think the wallpaper brings great warmth to the room,” she says, adding the coffered ceiling in here, and the ceilings throughout most of the home, are just nine feet to ensure a cozy ambience.

Upstairs, the master bedroom suite is tucked into the second story’s lake side, separate from the kids’ rooms. The bedroom features a striking black mahogany Noir Ferret bed, with tall saucer-like posts, a curved headboard and a dipped footboard. The bathroom offers an inventive surprise, with two windows set over the double sinks instead of mirrors, offering another chance to take in gorgeous views of the lake and the Capitol. (The windows were Patrick’s idea, too.)

Adjacent to the master suite is office space for Patrick, who is owner of engineering and consulting firm NCD Technologies, and an exercise room for Kate, complete with a Tracy Anderson Cardio Fly Super G maple floor, which has a subfloor spring mechanism said to minimize impact and boost calorie burn.

The kids’ rooms are a bit whimsical; one has a steeply peaked ceiling, for example, and all have eye-catching light fixtures. And in a nod to the past, the window coverings in all of the children’s bedrooms were fashioned from drapery that once hung in their previous home. “The older two kids were really sad to leave Bishops,” explains Kate. “So this is a little memento for them from the old house. When the drapes were installed, the kids were super excited about them.”

One aspect of their new home that really enthuses the couple is that they easily found a place for all of the artwork they collect. The first piece the couple purchased together—an oil painting of a tiny boat near the water by Anne Packard—has a prominent spot in the foyer, where it’s attractively set atop a background of bamboo wallpaper. In the dining room, a totem by R. Nelson Parrish, one of Kate’s friends, leans against the wall. The clear, glassy piece combines painting and sculpture. Band posters adorn another wall to reflect the Heaneys’ love of music, while an original vintage poster from Alyeska, an Alaskan ski resort, can easily be spied from its place of honor in the kitchen. The Alaskan poster is one of Kate’s prized possessions, as it reminds her both of home and of her former career as a professional snowboarder.

This house, says Kate, is definitely their dream home, and worth the wait. “When it’s time to go grocery shopping or out somewhere, I’m like, ‘Oh, man, I don’t want to go!’” she says. “I just love being in our home.”
This home was featured in the Madison Spring 2017 issue. 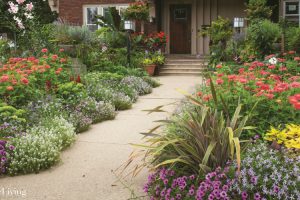