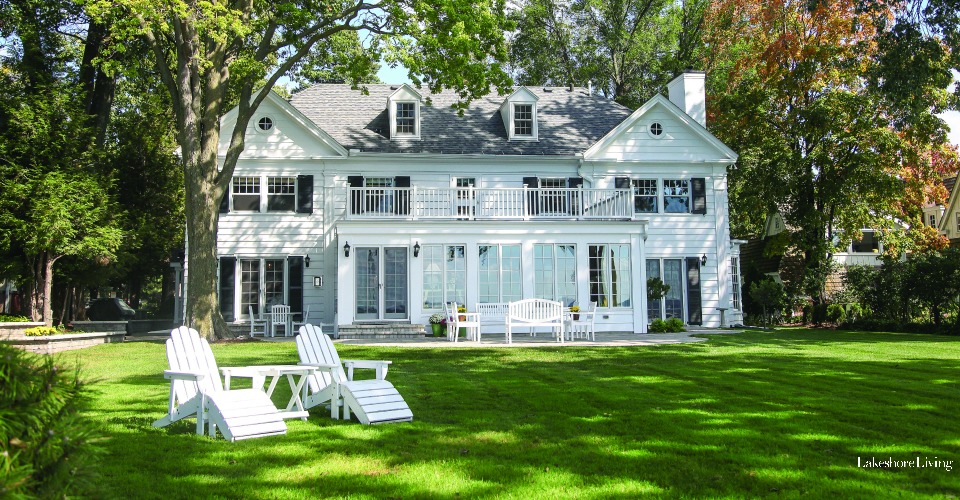 For 30 years, Mary Hermann was in love. With her Colonial home on Lakewood Boulevard in Maple Bluff, the home where she and her husband, Dick, raised their three children, Christopher, Nicholas and Brittany. But she was also smitten with a century-old Colonial two blocks away. And, that home was right on the water.

The white, cedar-sided home sat deep in its nearly-one-acre lot, far from the road, but close to the water. Although she dearly loved her family home, this house spoke to Mary, and she found herself walking, biking or driving past it often.

And then one day in 2008, it was put up for sale. The Hermanns tendered an offer, which was accepted, but the deal fell through when the couple who wished to purchase the Hermanns’ home couldn’t sell theirs. With the country in the throes of a recession, the cedar-sided home stayed on the market for the next five years. During this time Mary pored over its original blueprints, which the homeowner had given her, hoping the home would one day be theirs.

“I’d sit and try to draw little things,” Mary recalls. “Like how I’d want to reconfigure the bedrooms and bathrooms.”

In 2012, the Hermanns again put their home up for sale and put in another offer on their coveted Colonial. This time, all of the deals went through— the home was finally theirs. Now it was time to transform the rather staid, outdated property into one that reflected their lives and style.

The couple tapped Tim Gehin, head of Kensington Construction, to lead the remodel, in which they were heavily involved. The work entailed ripping out much of the home’s ancient innards, such as radiators and knob-and-tube wiring; knocking down walls to open up the main level, which contained a warren of tiny rooms and hallways; expanding the sunroom; adding another bathroom on the second floor; and transforming about 1,100 square feet of attic space into an expansive guest suite, complete with a full bathroom and pool table. The result is a 6,000-square-foot home with five bedrooms and five full bathrooms, plus a powder room—plenty of space for their growing family, which includes two daughters-in-law and four granddaughters.

It’s also a home now bursting with cheery colors, thanks to Mary’s natural panache and her collaboration with friend and neighbor Barry Avery, owner of Fontaine. “Mary likes fun colors that pop, but she tends to get a little too brash or harsh,” says Avery. “She told me, ‘Barry, I love color but I can go too far. I need your help pulling me back in.’” With Avery’s assistance, the walls in the living room, sunroom and kitchen sitting area are now a pleasing butter tone, while the kitchen, which features high-gloss white cabinetry and woodwork, is a rich, yet soft chartreuse.

The two also worked together to rejuvenate the entry and foyer into a fun, somewhat sassy, space. Originally, the home featured an inner entry door that corralled visitors into a cramped space and blocked views of the foyer and lake. Mary immediately wanted the door removed. “If we’re on the lake, I want to see it the moment I walk in my front door,” she says. The walls in both areas were covered with wallpaper featuring a fresh, geometric trellis design, while the foyer was tricked out with a black lacquer sideboard, oyster-shell mirror, bright-yellow zebra-printed wingback chair and a coral-burst chandelier. Now quite eye-catching, it’s one of Avery’s favorite spots.

“In most homes, a foyer sets the tone of the house,” he says, noting the Hermanns’ refurbished foyer reﬂects both the couple’s traditional bent and also the fact that they’re fun, happy and young at heart.

One of the Hermanns’ more unique remodeling decisions involved the home’s interior brickwork. Speciﬁcally, the brick accents in their dining room and kitchen. During the remodel, workers uncovered a narrow, vertical section of sand-colored brick on a portion of the dining room wall. When the home was originally built, that room was the kitchen, and the brickwork was part of its ﬁreplace. Sometime over the ensuing decades it was covered by cupboards. The Hermanns opted to leave the brick exposed as a decorative touch. Mary also incorporated matching brickwork behind the Wolf range in their kitchen. Now, when guests are standing in the kitchen looking toward the dining room, both sets of brickwork are visible, providing a pleasing visual tie between the two spaces.

Another innovative touch Mary thought of was taking the china cupboard that had been removed from their new kitchen (which was originally the dining room) and repurposing it as a decorative-yet-functional cabinet piece in the powder room.

Mary’s creativity—something she says she got from her mother—included incorporating nods to her past throughout the home. So the entry/foyer area features an arched, built-in bookcase because there were two such bookcases in the living room of Mary’s childhood home. And over in the formal living room, workers created a deeper fireplace mantle so it could hold a clock owned by Mary’s father. Mary then hung overhead a framed piece of decorative material her father purchased when he was stationed in Egypt during WWII.

Despite integrating loving memories in their décor, the Hermanns mainly looked to how their home could best serve their family now—their kids, grandkids and even their grand-dogs—with their remodel. To be an appealing, homey place for all, the couple selected furniture in their expanded sunroom that’s covered in a cozy, indoor/outdoor fabric, which can withstand sandy little toes and wet paws. And the sunroom’s floor-to-ceiling windows afford stunning, panoramic views that everyone in the family can enjoy from sunup to sundown.

Upstairs, Mary had planned to remove a bedroom wall separating two bedrooms, one of which was quite small, in order to create one spacious room. But her kids said no; leave it as it is, because the small room is a perfect nursery. So she did.

Outside, the couple expanded the patio and reworked the walkways, adding Portsmith benches and Adirondack chairs that overlook their 90 feet of frontage. Because although the Hermanns were drawn to their new home by its curb appeal, the lake is the star attraction.

“When I was growing up, we lived just a house away from the water in Rice Lake,” says Mary. “That’s where I learned how to water ski. And I often went to Red Cedar Lake 10 miles away, where my friends had a cottage and owned an island in the lake. I also remember my parents always saying to us, ‘Look over the lake at the sunset!’ I’ve just always been drawn to the water.”

The Hermanns have been in their home five years now, but they’re still not finished remodeling. Avery says he and Mary are still noodling over a few final details, such as custom runners for some of the hallways, and new lighting and bedding in the master bedroom. But it certainly feels like home to the couple.

“This was Dick’s and my vision,” says Mary, gesturing around the open, airy main level. “This is exactly what I wanted our home to be.”

A Lovely Lookout on Lake Mendota 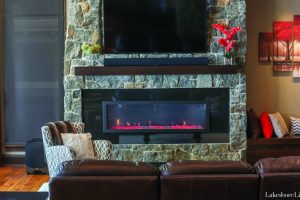