A Lovely Lookout on Lake Mendota 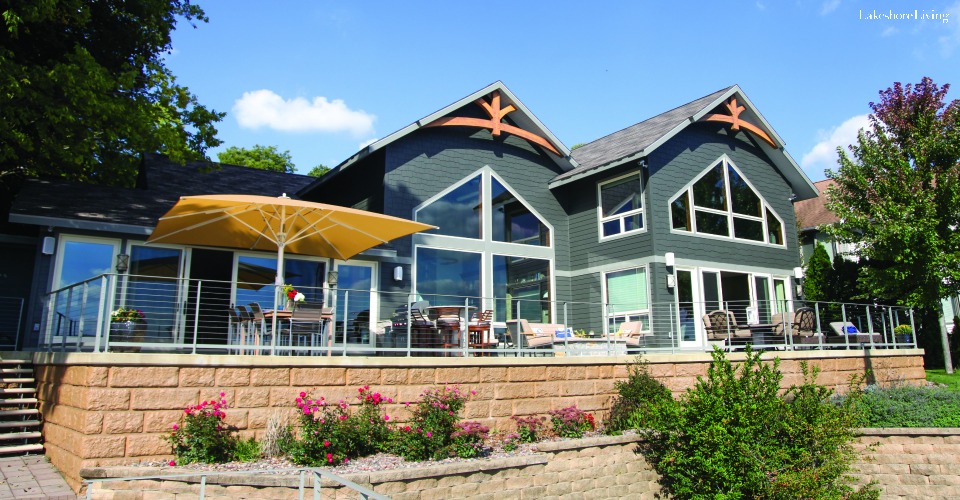 Birds chirp and crickets hum midmorning on the quiet street leading to Steve Bethke and Pam Anderson’s Madison home in an established north side neighborhood. Bethke grew up here—on this very site—but he replaced his childhood home with a new one a dozen or so years ago. And though the south-facing lakeside lot was the same one he loved all his life, the new home lacked the impact, the intimacy, ambience and water views that he and Anderson craved.

“You couldn’t see the lake,” Anderson says gesturing toward the water. “The rooms were too divided and the stairwell blocked the view. You could be sitting in the living room and not even know the water was there.”

So last year the couple decided to do something about it. They teamed up with Keven Schmidt and Dream House Dream Kitchens to completely reimagine the house from inside out.

For months Bethke and Anderson holed up in the lower level while together with Dream House Dream Kitchens they updated and transformed virtually every inch of the first and second floors. They opened the kitchen, the living areas and created an expansive great room with an intimate hearth area around a fireplace, a cozy breakfast corner and a roomy dining space—all distinct but flowing together, all open to the large and well-appointed kitchen, and all banked by floor-to-ceiling windows so nothing would obscure the stunning Lake Mendota views.

Glass doors lead to a patio with a firepit that was raised to be even with the great room so that crowds of guests could spill outside and move easily back inside when Bethke and Anderson entertained.

Making the home conducive to entertaining was a high priority. Both Anderson and Bethke love a crowd, whether it is a few couples for a dinner party or a house full on a summer evening. To do that, Dream House Dream Kitchens removed the interior walls, turned a first-floor half bath into a wet bar adjacent to the kitchen, and rebuilt the central stair with metal railings and floating stairs to open the view completely from the front of the house to the back.

The kitchen itself has innovative conveniences such as steam and convection ovens, induction stovetop and icemaker so ice is always clear and fresh.

Around the corner is the first-floor master suite, which is a combination of renovated space from the existing home and a new addition. Anderson says the main goal for that space, too, was to capture the sight and the feel of the lake but, at the same time, not leave them feeling overly exposed to neighbors or boaters passing by.

Schmidt says his team was careful with planning the addition so Bethke and Anderson could feel comfortable in the suite at all hours of the day. The wall of south-facing windows opens to the water for impressive views and abundant light, and Anderson is grateful that she did not have to compromise on either windows or privacy.

The rest of the master suite contains a bathroom with a large soaking tub, walk-in shower, and a broad vanity with built-in powered storage with outlets for hair dryers and curling irons, making appliances easy to access and just as easy to tuck away.

Behind that is a wardrobing room with separate storage for his and her clothes. And tucked in the very back is a laundry station, a large crafting island and a desk. Windows draw in natural light in this workshop area that Anderson, a former consumer and family sciences teacher at Middleton High School, loves and uses as a home office as much as a utility area.

“Steve and I both really like this room,” she says.

The colors throughout the master suite are sandy earth tones and sea-glass hues of green and aqua. Accent shades in the deep peacock drapes and bedspread suggest a darker blue the lake takes on at dusk when the sun escapes over the horizon. Again, the palette, Anderson says, was inspired, like the rest of the house, by Mendota.

“The colors of the lake are soothing and calming, and that is the feeling I wanted for our home,” Anderson says, “to create a serene oasis that blends with the beauty of the surrounding nature.”

Upstairs is a television loft, a guest room and a second master suite that, while not as spacious, is every bit as stunning as the first. The airy space with soaring windows, nicknamed the “Minter Suite” after Steve’s mother’s maiden name, captivates guests with their own personal lake views, and the updated guest bath—again in sandy tones—is stylish and comfortable.

That was important to Anderson, who wanted all guests to feel just as comfortable and every bit as home here as she does. She even jokes that the upstairs master suite has an even better view than her own so she and Bethke sometimes head there for weekend getaways—but if the room is any way “better” than her own, it does not bother her a bit.

Guests, she says, get the same lake-house, vacation-like feeling that she enjoys every day. “Everyone who comes over wants to stay and never leave,” Anderson says. “I feel very blessed and lucky that we can share good times with friends and family.”

A NEW AND IMPROVED ABODE

Schmidt says Bethke and Anderson were wonderful clients who really handled the disruption and even some of the uncertainties of construction—something that Schmidt says could not have been easy. “We ended up taking up three quarters of the roof to get new ceiling beams in, and we did it in January and they were living in the basement,” he says.

But because of his amenable clients, Schmidt enjoyed the project from start to fi nish and is just as pleased with the results as Bethke and Anderson are. “The house is 75 feet wide, and they weren’t taking advantage of the width of the house,” Schmidt says. “I like the fact that when you walk in from the road side you now immediately see 75 feet of lake.”

Anderson says the lake makes a much bigger impression now, and it has wonderfully rekindled Bethke’s personal connection to that lot on that land on that bit of lakeshore.

“Steve has so much history and knowledge of the area and how time has evolved,” Anderson says. Bethke shares his stories about growing up there, how neighbors would boat over for happy hour at the end of the day, and how those informal gatherings forged close friendships and formed powerful memories. Seeing the water daily also prompts insights about how the lake will react when the weather changes, when the ice thaws or the winds kick up.

“Sometimes we will go upstairs, look out over the lake, turn all the lights off and watch a storm come in,” Anderson says. “It is magnificent.”

A Lush Landscape on Geneva Lake 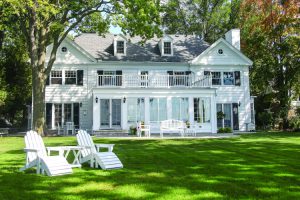 By Melanie Radzicki McManus | Photography by Shanna Wolf For 30 years, Mary Hermann was in love. With her Colonial home...
Copyright 2018 Nei-Turner Media Group
Back to top