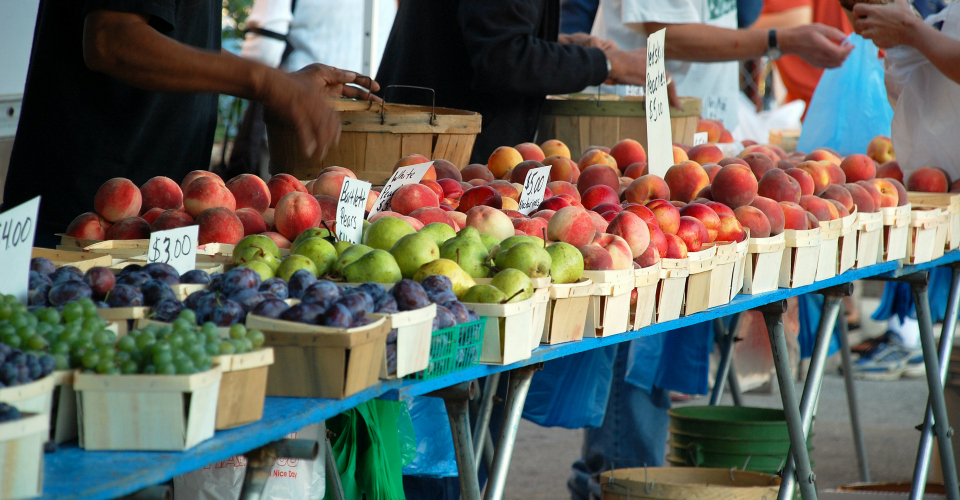 By Mary Bergin and Shayna Mace

From Plant to Plate

When picked at the peak of ripeness, fruits and vegetables taste outstanding all on their own, with little need for complicated preparations. Snack on raw sugar snap peas, including the edible pod, or bite into a tomato as though it were an apple. The simple roasting of carrots or squash works. So does the quick steaming of string beans, or sautéeing of Brussels sprouts.

But locally-grown ingredients also motivate chefs to go above and beyond traditional recipes, sometimes turning these ingredients into menu stars—especially at John Bogan’s Lake Geneva School of Cooking. Bogan’s Farmers’ Market and More class (which started in mid-May) whisks a group of attendees to the Lake Geneva Farmers’ Market on Thursdays where they select fresh ingredients and whip up dishes made with their market bounty.

The dishes within the three-course meals vary throughout the spring and summer based on what’s in season. In early spring, attendees might make grilled shrimp with asparagus pesto and asparagus with chopped egg and Kalamata olives over baby greens drizzled with an orange white peach vinaigrette. In summer, it may be zucchini saltimbocca and a sandwich with pan-seared zucchini, smoked gouda and fresh sage, served with greens. In August (“right when you have all of these beautiful vegetables,” notes Bogan), guests may prepare a ratatouille with eggplant, heirloom tomatoes and zucchini. When the season shifts to fall, Bogan may dream up a fall harvest risotto with vegetables.

But Bogan doesn’t just use local purveyors during farmers’ market season—he works with farmers year-round. One of his favorites is Burlington’s River Valley Ranch for their mushrooms. He also visits Wilson’s Farm Meats in Elkhorn a few times a week for their bacon and pork and Lake Geneva Country Meats for their sausages.

Wild swings in temperature and precipitation can affect crop yield and ripening, like in this year’s growing season, which is behind schedule due to cooler temperatures. Conversely, greenhouses or hoop houses extend growing seasons because the climate is controlled.

Here is what to expect at Wisconsin farmers’ markets during a typical growing season.

Please confirm location, date and time with each individual market, as it may have changed since this article published.

Wisconsin is well-known for our agricultural heritage, family-owned farms, farm-to-table cuisine and farmers’ markets. In 2002, Madison-based REAP Food Group, an organization that promotes a sustainable local food system in southern Wisconsin, started the Farm Fresh Atlas to publicize local food producers in Wisconsin. With a grant from the United States Department of Agriculture, the organization pulled all five of its regional guides together into farmfreshatlas.org, which lists farmers and food producers, farmers’ markets, restaurants, retailers that sell local food and more. According to a REAP press release, “The enhanced collaborative website is … for the public, farmers and restaurateurs who enjoy local food resources throughout our bountiful state. You can now find everything you need in one location,” says REAP Executive Director Helen Sarakinos.

The following article is sponsored by Keuler Construction. In 1993, after 22 years as a skilled carpenter, Willy Keuler...
Copyright 2018 Nei-Turner Media Group
Back to top