The Art of Lake Life on Presque Isle 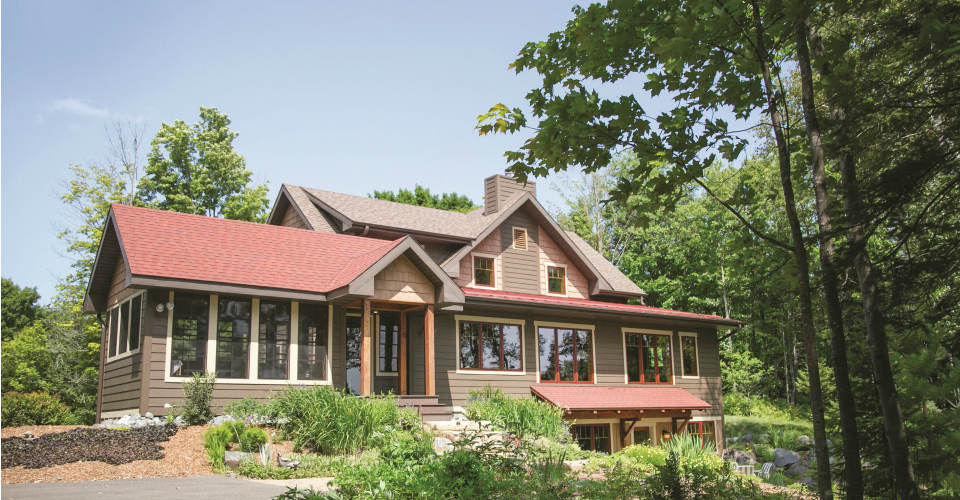 The first time Gary and Barbara Plouff saw the land upon which their Northwoods dream home now sits in Presque Isle, they had to hike in on snowshoes.

“This area we’re in is called Frontier Lakes Preserve,” Gary explains. “It includes two lakes on a huge property—approximately 1,300 acres. One person owned all of this land, including the two lakes, and he sold it off to a developer about 25 years ago, who came in and cut in roads and divvied up parcels of land around both lakes.”

So about 23 years ago, the Plouffs, who were living in Pewaukee in southeastern Wisconsin at the time, came up to look at the land with an eye toward someday retiring to the area. They arrived after a spring snowstorm, an unforeseen variable that necessitated the snowshoes. But according to Barbara, it was “the beauty of the lot” that convinced them to buy.

“I grew up in northern Wisconsin. I remembered lakes where there were very few homes on the lake and it was so quiet with only the calls of the loons in the evening. We bought this lot because it reminded us of that time.”

About seven years ago, they decided they were ready to make the fulltime move, and began designing the perfect home for their land. Both Gary and Barbara, a retired commercial architect, were heavily involved in the process.

“I wanted to go back to my childhood and the older homes I knew then,” explains Barbara. “So it’s a simple house based on the Craftsman style.

Where I grew up, there were many older homes with different additions over the years, which led to different colored roofs. I wanted that feel of an older home for this one, even though it was new.”

They worked with Stoughton-based Shaw Building and Design, Inc. to flesh out their ideas. “Gary and Barbara had a real vision of what they wanted,” says Dawn Shaw, who co-founded the company with her husband Greg. “It’s great to see that—it makes our job easier.”

One of the most important elements for the Plouffs was to get the view just right. “How the house was going to sit on the property was a visual concept of Gary and Barbara’s,” Shaw explains. “It became obvious we were going to have to cut into the hill in order to achieve it, and also to make that driveway usable, particularly in the wintertime.”

Barbara agrees. “The biggest challenge is that the house is built on a ridge,” she says. “That’s why there are so many levels to the house. We wanted to cut down fewer trees, and building into the ridge worked out really well.”

Though Barbara describes the house as “small in scale,” the inside of the home feels warm and spacious, thanks to the knotty pine paneling, hickory floors and exposed glulam beams. Both Gary and Barbara say the screened porch room is one of their favorites. “We wanted a real, true screened porch room. But the winters are long here, so I also made the living room look like a porch,” Barbara explains. A large stone Acucraft wood-burning fireplace is the anchor of the living room. “I usually make a fire every night in winter,” Gary says. “It’s just great when you’re sitting by the fire and you’re able to look out over the snow-covered lake and see the snow lightly falling and the fire crackling.”

Barbara says one of her favorite rooms in the house is her art studio, with its northfacing light.

“That room has its own exhaust fan and its own heated air supply,” she says, as well as “daylight fluorescent lights and a large area with two work stations.”

Barbara’s art, created over a lifetime, is displayed in many of the rooms of the house, alongside works by Wisconsin artists, many of whom Barbara and Gary have befriended over the years.

“Many of the things in the house are family heirlooms or things we created,” says Barbara.

The focus on artisan craftmanship extends even to the roomy, state-of-the-art kitchen, where a five-burner GE self-cleaning convection range and a KitchenAid French door refrigerator hold court. “All our cabinets were made by an Amish cabinet maker from Schmucker Handcrafted Cabinetry in Loganville, Wisconsin, about an hour northwest of Madison,” Gary explains.

The overall effect of the home is time-worn and well-loved, despite the newness of the home, which is just how the Plouffs wanted it. Enjoying retirement, Gary and Barbara hope to stay in this spot for a long time.

“Already in the plans is a place where an elevator can go in if the stairs get to be too much someday,” explains Shaw. “If this is going to be a retirement home, it needs to be one you’re really going to be able to live in for the long-term.”

After many years of planning, sketching and dreaming, the Plouffs are extremely pleased with the result. “This house is just what we wanted,” says Gary. “We love the great lake view. You’re sort of rooted in Northwoods history … but also with all the modern conveniences as well.”

Anne Morrissy is a professional writer and editor from Williams Bay who now splits her time between Walworth County and Chicago. She is a frequent contributor to Lakeshore Living and At The Lake.

To complement and enhance their collection of family heirlooms, Gary and Barbara also collect and refurbish antiques, including the 100-year-old mahogany grand piano with ivory keys and the 1940s tablecloth on the antique table on the porch. Gary also refurbished a vintage toboggan that originally belonged to his father, hanging it vertically on a wall to serve as a creative display for artwork.

In addition to the significant amount of Barbara’s original artwork on display throughout the home, the Plouffs also collect works by local Wisconsin artists. An oil painting of onions by Ken Bronikowski hangs in the kitchen, and a work by photographer Robert J. Kuski of Green Bay is displayed above the tub in the master bath. The Plouffs purchased several pieces from Antler Creations Northwoods Gallery in Minocqua, including the hand-carved and painted wooden walleye in the living room, the custom handmade log-and-twig stools at the kitchen counter, the handmade log-and-birchbark desk chair in the kitchen, a custom-made lampshade and a hand-carved musky. 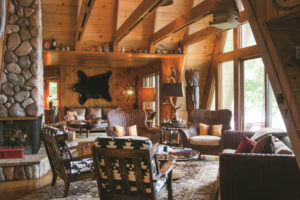 By Shelby Deering | Photography by Shanna Wolf The totem pole stands tall and proud in the backyard, overlooking the waters...
Copyright 2018 Nei-Turner Media Group
Back to top