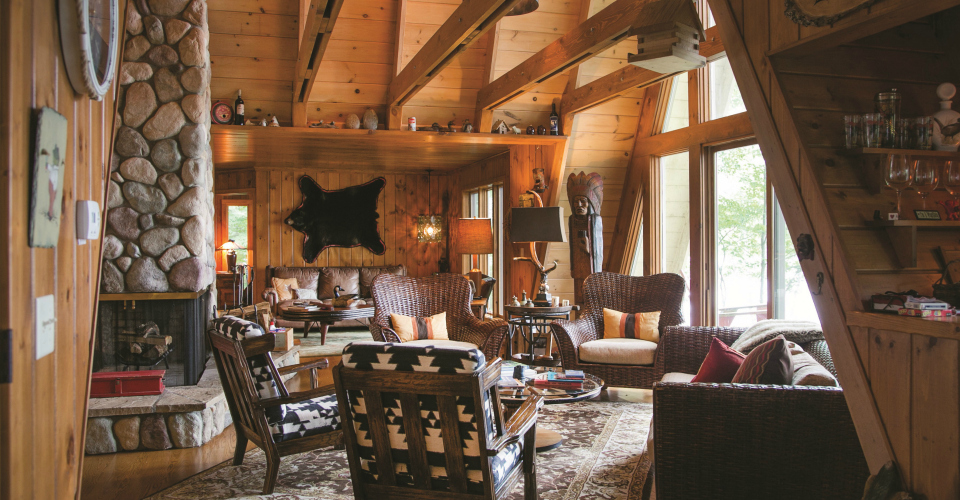 The totem pole stands tall and proud in the backyard, overlooking the waters of Manitowish Lake. It might look as if it’s just a nod to Northwoods traditions, but it’s more than that. It’s an important piece of family history—a symbol that’s close to Keven Schmidt’s heart.

Schmidt’s life is woven with long, storied histories. He founded his Madison-based company Dream House Dream Kitchens, a full-service remodeling and design company, in 1986. He has three grown children, all of whom are involved in the business. And his second home in Manitowish Waters simply brims with rich, vibrant family memories.

“My parents had a totem pole at their cottage,” Schmidt says. “For about 35 years, I had the family totem pole. It disintegrated because it got old. I had pictures of it, and I had the same exact pole made again six years ago. The plaque from the old one, which says ‘Schmidt House,’ is on it. I just hope my kids have it for a long time after me.”

His parents’ cottage was located in Manitowish Waters, which is how his love for the area started. After spending childhood weekends on the lake, Schmidt returned to build cottages and second homes for clients. That’s when he spotted an A-frame home built in the 1960s.

He purchased it for the stunning views and 400 feet of shoreline plus additional frontage.

“I originally bought it to tear it down,” he says. “But then I made the mistake of starting to work on it and I fell in love with it because it was small and old and it started turning out cool.”

Schmidt has plenty of family in the area, including an uncle who visited the home soon after it was purchased.

It was built in 1963, designed by a Chicago architect for a family who went up north for the month of July. In the summers, they would play tennis on the court that still resides on the property. And in the winter, they’d make special trips from Chicago to hit the slopes—Schmidt discovered photos left behind in the cottage of the family downhill skiing together.

When he began the renovations, Schmidt started with replacing the windows because they tended to leak. The interior was stripped and gutted to allow for new design elements.

“We were building another cottage, and we harvested some pine trees from the property,” Schmidt says. “We had a machine create the wall paneling, and that’s all the paneling on the inside.”

Schmidt adds that there was an original accent that was kept throughout the renovation process—the fireplace.

He says, “It’s a three-sided fireplace, and you can’t build those by code anymore. Even though we redid everything around the fireplace—new kitchen, new appliances, new electrical, new lighting fixtures—I said, ‘We’ve got to keep the fireplace.’”

Featuring stones that were pulled right from Manitowish Lake, the fireplace pairs flawlessly with the other visual aspects of the home. Schmidt designed the home alongside his late wife, Terri, a designer and partner at Dream House Dream Kitchens. She passed away in 2016, and Schmidt shares that she was “very, very talented.” Her keen eye for design and the memories she created there with her family continue to permeate this beautiful home.

When Schmidt and his family began vacationing at the home in 2006, they arrived with their treasures in tow. The décor represents “25 years of jumping in the Suburban and going to have a beer somewhere and looking at every antique store along the way,” Schmidt says.

There are hand-carved totem poles inside that echo the venerated totem pole that sits outside, a carpenter’s bench from the 1930s, old fire extinguishers turned into lamps and much more.

There’s also a fair share of family heirlooms on display, like the wagon wheel table that sits in the great room.

“That was actually built by my dad in the 1960s for his cottage,” Schmidt says.

It seems fitting that family memories are made in the midst of these heirlooms. Schmidt says that there’s only “one rule” at the cottage—“everybody has to show up for the week of the Fourth of July.” His children and their partners all come up north for some summer fun, and the family also tries to assemble for Labor Day and Memorial Day. Christmases are spent skiing and going from house to house among Manitowish Waters family members.

Schmidt truly relishes the home during the wintertime. Since the wood paneling was stained with a red hue, he says that when the fire’s going, it casts shades of red and yellow onto the interior, which creates “an amazing glow.” The family cooks chili together. And Schmidt often comes up on his own to design and soak up the peace and quiet.

He equally enjoys the hustle and bustle of family in this home, designing it with visitors in mind.

Schmidt says, “The bedrooms and the bathrooms are key because everybody needs a bedroom and everybody needs a bathroom. We have three bedrooms and three bathrooms so that each bedroom has a bath. Every bedroom has a dresser and built-in suitcase stand. When somebody comes, they can hang their clothes up and put their suitcase into a spot. We set it up so that it goes click, click, click and

they’re in. We’ve designed it so everyone can just come and go.”

But there doesn’t seem to be a lot of “going” in this cottage. In fact, the Schmidt family has a tradition that requires not moving at all, and they call it “holding court.”

As they sit in a circle in the great room, the Schmidt family chats over cups of coffee and the roar of the fireplace, talking about ways they can make Dream House Dream Kitchens even better or reliving fond family experiences. At night, coffee changes to glasses of wine and even more stories are shared.

Schmidt purposely designed this home to not feel like a full-time home, saying, “My whole thing is that when you walk into the cottage, you know you’re in a cottage. You’re away from home. It doesn’t feel like your house.” Basking in the glow of the fire and family memories, the cottage indeed feels more like a special sanctuary than a vacation home.

Shelby Deering is a lifestyle writer from Madison, contributing to regional and national publications like Experience Wisconsin and Country Living.

The Art of Lake Life on Presque Isle 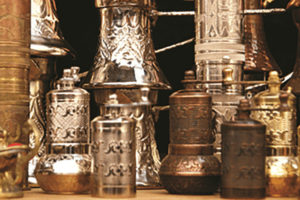 Home décor trends come and go, but one theme that remains consistent is accenting a space with items that have a backstory...
Copyright 2018 Nei-Turner Media Group
Back to top