A Contemporary Showpiece on Lake Waubesa 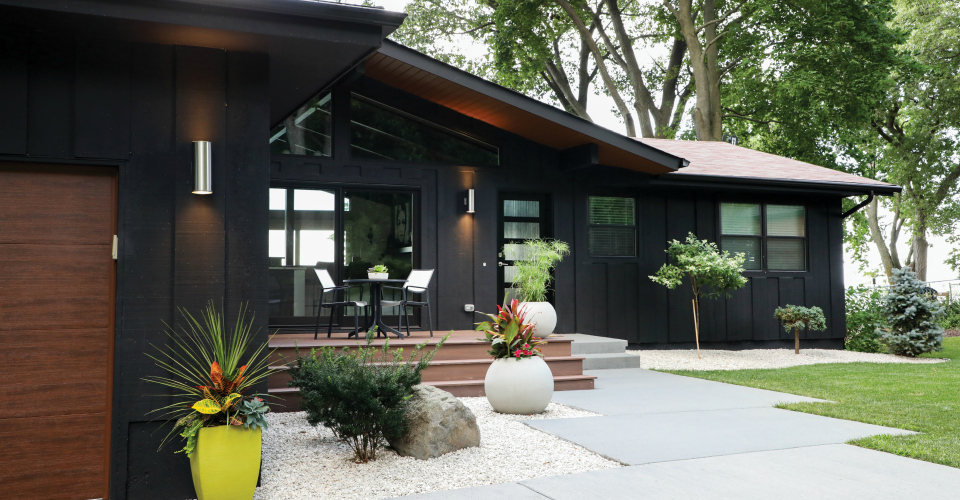 As seasoned house-flippers and real estate owners, Ashley and Luke Bruckner know a good house when they see it. The Madison couple had been living in the Westmorland neighborhood on the near west side of Madison but always kept an eye out for just the right lake home. It helped that Luke is a realtor—so he was able to stay abreast of the market.

When they spotted a property in 2016 on Lake Waubesa in McFarland, Luke knew the right house had come along. However, the couple agreed the dated floor plan would need to be addressed— as did the landscaping in the back of the house that was choked with trees—that blocked the lake view entirely.

The couple consulted with an engineer friend to plot out the home’s renovation.

“I wanted this house to be unique, because everything had to be a certain way with the staircase where it was,” explains Ashley. “I’ve always liked modern [style], and with the beams where they were in the main [living] room, we just embraced that and brought up [the whole home] to a modern standard.”

The couple tackled much of the work on the 1962 house themselves, as well as hired friends and trusted contractors they work with on their house flips. In all, the renovation took two years, on and off.

Now, the entertaining-friendly home has everything the couple and their two Boston Terriers, Hank and Roy, need—including a killer lake view and sunsets every day.

Walking into the home, the main living area, kitchen and dining room are all in one—and the pitched ceiling with exposed beams—although already there—perfectly fit Ashley’s midcentury modern aesthetic. All the couple had to do was paint the beams black and leave the ceiling its existing warm wood color for contrast. One entire wall is exposed brick, which the couple also opted to leave—although they painted it gray—and replaced the old fireplace with a minimalist gas one. Ashley also had a smaller wall adjacent to the front door covered with Ipe wood—a hardy Brazilian species that marries into the neutral color scheme flawlessly.

The largest change on the main level was relocating the kitchen from the front wall of the home (that has a street view) to the side and adding in an island, so now the couple can cook and socialize—while still catching water views. They also added a clever eight-foot-long bar-top table and seating area alongside the staircase that looks directly out to the water. They frequently eat dinner here or guests can hang out and sip their drinks.

With the kitchen relocated, the Bruckners were able to install huge sliding glass doors that lead out to a quaint deck area in front of the house where Luke can grill and they can eat outside.

The couple also carved out other smart space hacks on the first level, like tucking in the washer and dryer in a front hallway along with a handy dog-washing station. The master bedroom and bath and two guest bedrooms and full bath sit in the same footprint as before—albeit stylishly updated with sleek, modern décor.

In the lower level is another hangout area with wet bar, ice machine, wine fridge and cabinetry that was added by the couple. The quartz waterfall island and seating area is also a stunning update to the room. Also downstairs is a cool workout room plus kicky sleeping area for the Bruckner’s nieces and nephews when they visit.

Although the house was a lot of work and the couple encountered some bumps in the road along the way (like replacing rotted siding on one side of the house), they are both in love with the finished product.

“We get the sunsets, and I think that’s both of our favorite parts of this home,” says Luke. “We both like sitting out here and having a drink at night and watching the sun go down. And obviously, the lake view is incredible.”

This home was featured in the Madison: Fall 2018 issue. For more photos of featured Madison homes, visit the Madison Gallery page. 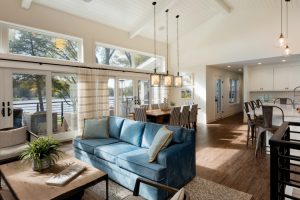