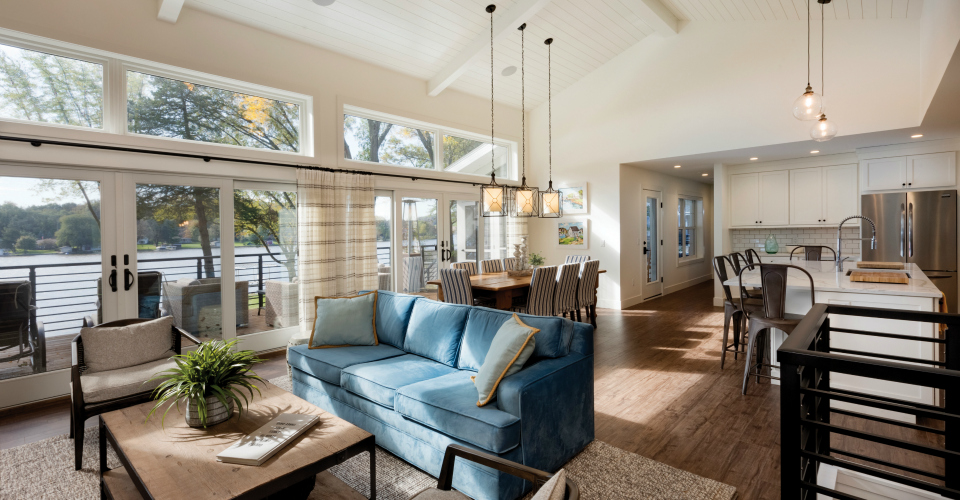 Fred and Katie Cromer never intended to purchase a lake home. Not that the two didn’t enjoy being on the water. The couple both grew up in Evanston, Ill., and regularly vacationed in Lake Geneva with their families. Still, they had no plans to purchase a lakeside vacation home until they spotted one for sale in 2015.

It was a 1970’s-era ranch home on Lake Wisconsin’s Okee Bay, and it featured 100 feet of lake frontage— twice the norm. But more importantly, it sat in between homes owned by Fred’s father and his sister and brother-in-law. The chance to be this close to family was priceless, especially since Fred’s job with Bombardier Inc. required the family to relocate a few times over the years. In fact, when the couple purchased the home, they were primarily living in Los Angeles, although Fred had recently taken a position with Bombardier that was based in Montreal. A second home in the Midwest would make a convenient meeting spot for the family.

The Cromers tapped Vive Home Transformations to remodel the 2,265-square-foot ranch house into a welcoming place that would be able to sleep plenty of people. While their three daughters—Lauren, Caroline and Allie—are grown, the Cromers enjoy entertaining and wanted their kids to be able to visit with friends in tow. After checking into the cost of renovating the existing structure of the original ranch home, the estimates came in over what the Cromers and Vive had expected.

So Joel Geissbuhler, project development manager for Vive, says that after discussion and collaboration with the Cromers and Vive’s associates, everyone agreed it would be easier, and actually less expensive, to tear down the house to its foundation and rebuild from there.

Once that decision was made, things proceeded much more smoothly. And by the summer of 2017, the Cromers had their new lake home: a 3,800-square-foot abode that was homey and intimate, yet could sleep 17.

The focal point of the home’s main living area is, of course, the lake. It spills into the combined great room/kitchen/dining room through a wall of glass. “They have two sets of dual-operation sliding doors, plus large transom windows above that, that let in about 228 square feet of natural light,” says Geissbuhler.

To enhance the light and lake views, the interior of the main living area is clean and white, with a shiplap ceiling and maple kitchen cabinetry painted with a white icing finish. Warmth comes from the mocha-toned luxury vinyl flooring and the local, reclaimed barn wood used in the great room’s stone fireplace mantle and open shelving. Soothing lake tones are reflected inside via a sky blue couch and numerous blue glass accents.

Yet if this palette sounds a bit cliché for a lake home, the effect is not at all that of a cottage or beach house. Katie wanted to create an industrial farmhouse look, which mixes modern metals with rustic woods. And she achieved that with the help of Amanda Funk, head of Niapa Building Planners, and Carrie Simpson of Vault Interiors & Design.

With Katie many states away, the women often communicated ideas through Pinterest, creating boards for each room in the house. “Joel told me that at one point, he had to block me because all of my pinning was setting off his phone all night long,” Katie laughs. But the strategy worked well.

Simpson was able to locate metal chairs that worked perfectly with the kitchen island, and metal-framed beds for the Cromer daughters’ room, created in a lofted area above the garage. “The metal makes the beds very light in visual presence,” says Simpson, “which is valuable because there are four beds in there.”

Katie, in turn, scoped out most of the home’s unique light fixtures, many of which she found on Pinterest. The Cromers also incorporated items from their previous homes into their new Wisconsin digs, such as the massive pine dining room table, a sentimental family favorite from their years in Houston.

With the home largely finished except for some wall décor, the Cromers’ next project is a rebuild of the property’s old boathouse, plus a new look for the landscaping.

“I’m just so happy with the outcome of this project,” Katie says. In fact, once Fred retires, Katie says she can envision making this spot their home for half of the year.

“I never imagined how much we’d enjoy being here in rural Wisconsin,” she says. “It’s just so pretty and relaxing.” Just like their beautiful, new home.

This home was featured in the Madison: Fall 2019 issue. For more photos of featured Madison homes, visit the Madison Gallery page.

Welcome to the Jungle at Wildewood

A Contemporary Showpiece on Lake Waubesa 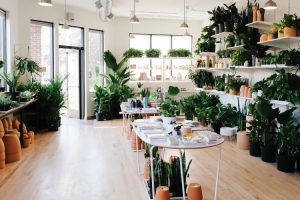 Welcome to the Jungle at Wildewood

This time of year is the perfect moment to reintroduce some green back into your life— after all, with the impending fall...
Copyright 2018 Nei-Turner Media Group
Back to top