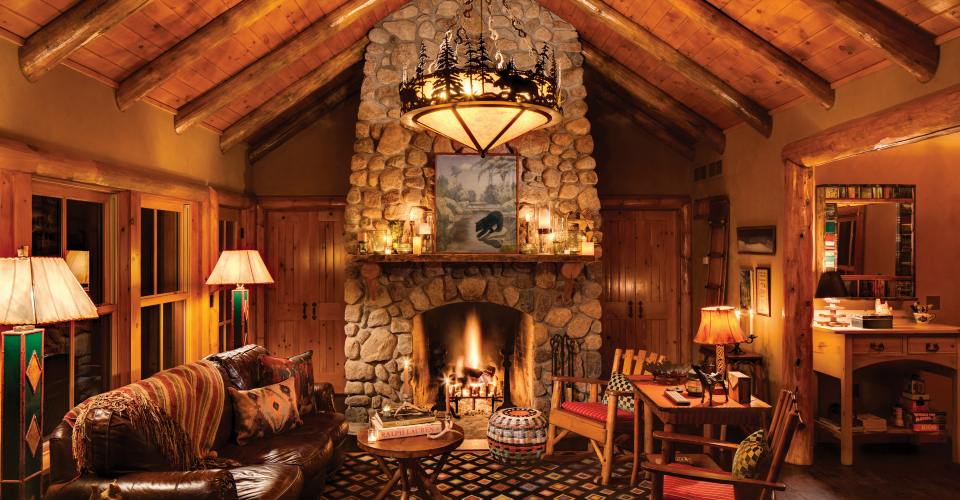 For native Milwaukeean Wade Weissmann, the Northwoods has always held a special allure. Growing up, Weissmann’s large, extended family would vacation during the summers on idyllic Paradise Lake in St. Germain.

Buoyed by those childhood memories, Weissmann continued to journey up north as an adult to spend time in the area. He also started a lakefront property search that lasted nearly 10 years for the perfect piece of land that he could purchase himself.

“My cousins and I have fond memories of spending time up in the Northwoods. So, fast- forward 40 years and my cousin, Jon Schlagenhaft [and I], who was an interior designer in Milwaukee, would rent a house [up north] for a month at a time during the summers. And our search ended when we found this property on Star Lake, which was part of an old resort,” the architect explains.

The property was being divided and sold as two large lots and two smaller lots, each with a larger lodge and small guest cabin on it. Weissmann and Schlagenhaft planned to purchase one lot each, and then find family and friends to purchase the other two lots, to make it a “family compound destination,” says Weissmann.

After purchasing the lots, Weissmann, owner of Wade Weissmann Architecture Incorporated, got to work on the house plans. He and Schlagenhaft tore down the larger buildings on each lot, and rebuilt two new lodges for themselves to use. They left the smaller guest cabins on each property since they had prime positions next to the water—but expanded each building to twice its size. In total, the construction and renovation lasted three years.

In his main 2,600-square-foot lodge, Weissmann went for a cozy feel.

“As a gathering place and retreat, this would have an inherently different layout. You want everybody to feel comfortable here, because we use this place for entertaining,” he explains. “So there are a lot of gathering spaces … and a big kitchen for multiple people to be working and preparing meals together—it’s meant to be communal.”

Weissmann opted to use a mix of red and white pine in the interior, and cedar on the exterior because of its hardiness. The wood-burning fireplace surrounded by river stone is the main level’s focal point.

“Architecturally, I wanted it to have simplicity. It’s all about the fireplace and sitting in front of the hearth, since the weather up here usually means cooler evenings,” he says.

The simple, white pine floors are “utilitarian” says Weissmann, as he wanted them to lend authenticity to the space. “They’re dented, and they have marks in them—and that’s what I wanted. I wanted the [lodge’s] finishes to reflect an attitude.”

Since he uses the lodge year-round, Weissmann worked with Schlagenhaft on the original interior design—and has since added many of his own touches and items he’s collected from his travels for a time-worn, sentimental—yet stylish—look. Paintings have been collected from a number of different artists—and there’s even a landscape his father painted peppered in. Weissmann also likes vintage brewery artifacts, so his lower level rec room and bar area features retro Schlitz and other brand advertisements.

“Over the years I would actually take different routes from Milwaukee up here so that I could pass through little towns that had different antique shops,” says Weissmann. “I’ve found great antique shops in Manitowoc and Antigo, and every place in between, like Waupaca, Princeton—you name it. And, there are some really good antique shops up here in the Northwoods that I’ve also utilized.”

Another hub of activity is the lodge’s kitchen.

“Believe me, we cook up here a lot. [So] I designed the kitchen to be very transparent with a lot of windows. We left the trees outside really close to the cabin so that the house feels like it’s nestled in,” he says.

Weissmann also installed two matching stoves in the kitchen for a larger cooking area. And, the design touches tie it all together. Bronze screening in the cabinet doors (instead of glass) make the space more casual, and perforated tin pendant lights from the Tin Bin exude dancing displays of light. Live-edge pine countertops and custom cabinetry by Burmeister Woodwork Company lend a personalized feel to the space. The walls throughout the first floor are covered in a Ralph Lauren suede paint “to give the walls a rougher, leathery type of texture,” says Weissmann.

Although each lodge and cabin on the properties has its own personality, Weissmann says Schlagenhaft’s lodge was the embodiment of his exuberant life—and his lodge still looks the same today (although it’s now owned by a family friend). Unfortunately, Schlagenhaft and his partner died in a plane crash in 2008—so the full scope of his interior designs for all of the spaces weren’t fully realized. But Weissmann says that he still has Schlagenhaft’s original fabric selections and eventually, he’s going to outfit his own lodge with curtains and drapery to add polish. And although his cousin isn’t here to share the properties with him anymore, Weissmann says Schlagenhaft’s memory reigns large—and plenty of wonderful family times are still enjoyed today at all of the lodges and cabins.

“There are a lot of building materials and artifacts that are in this place that are bits and pieces from my career and my life,” says Weissmann. “I like the casualness here. Although this place as a whole is precious to me, there’s nothing precious in here—and I like it that way because I like it shared, and this place is happy when it’s full of love and togetherness.”

More about the Home

Wade Weissmann’s kitchen overlooks the water, and the hominess is apparent in the space. The live-edge pine countertops were purchased for a song at a local lumberyard. “It’s a nice, soft material, and it feels good to work on,” says Weissmann.

The kitchen in Schlagenhaft’s former lodge features bear cub taxidermy, scalloped open shelving and all of his favorite collectibles. Weissmann’s large walk-in pantry also doubles as a prep area, he explains. “Having this pantry gives us the ability to have three or four people working in the kitchen at once, which is really nice.”

The cozy bar in Weissmann’s lower level beckons guests in to relax and sip a drink. Vintage brewery memorabilia (like the framed Schlitz ads) celebrate his love for this antiques genre.

A slice of life (including a wild pig taxidermy piece that Schlagenhaft found for him) in Weissmann’s lodge.

Schlagenhaft found matching area rugs for each of their lodge’s living rooms, so both lodges have the same patterned rug. Weissmann’s living room (seen here) is peppered with items he’s collected over the years from travels and antique shops. “There were some really great places up here that closed unfortunately. There was one placed called Cabin Fever that had all of this great old camp stuff. There’s another place I buy from a lot called Perennial Antiques (that’s still open) and the people there are [great] and have fantastic stuff,” says Weissmann.

Weissmann’s spacious screen porch is a peaceful place to start or end the day. An interior designer friend gifted him the rustic camp lanterns.

Since he wanted two full bedrooms and bathrooms plus a main living area in his guest cabin, space was at a premium. So he chose to put the sink areas outside of the bathrooms “to give a lot more floor space.” The other guest bedroom is a peaceful retreat.

The Best Ways to Welcome Winter (Outdoors) in the Northwoods

The Best Mac 'n Cheese to Make This Fall

Shayna Mace is the editorial director of Lakeshore Living, a publication of Nei-Turner Media Group. 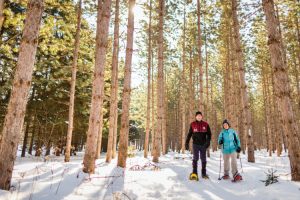 The Best Ways to Welcome Winter (Outdoors) in the Northwoods

By Kevin Revolinski | Photo courtesy of travelwisconsin.com Although it may be temperate now, come winter, the Northwoods...
Copyright 2018 Nei-Turner Media Group
Back to top