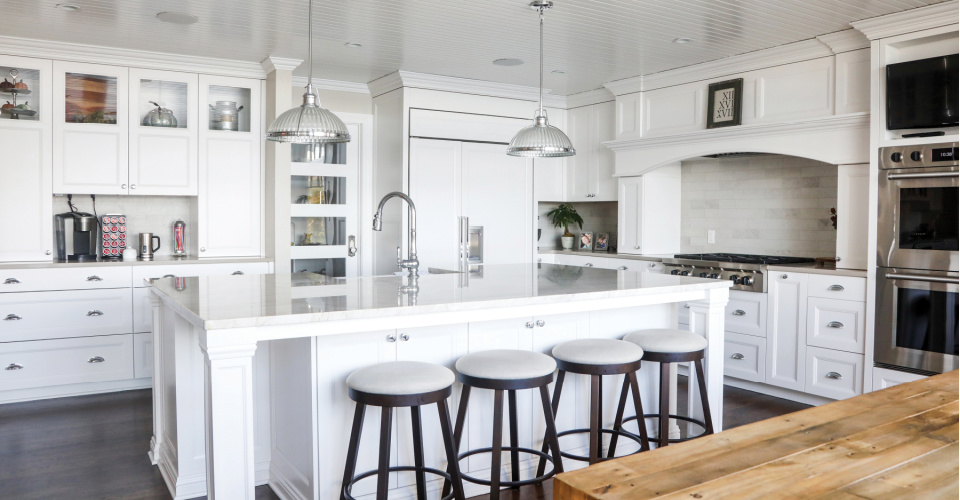 It’s the little stories living in the soft interior of Gary and Cris Nevermann’s home that make it so special. Like the glass doorknob of the pantry selected specifically because it reminded Gary of the one affixed to his grandmother’s pantry door. Or the oversized furniture in the living room lovingly picked for its “flop-ability” — furniture their kids and grandkids could flop onto for cuddling or an afternoon nap. It’s the basement pub reminiscent of the Kennedy Manor Bar in Madison that reminds Nevermann of his college days.

All these little details are manifestations of memories the Nevermanns have had, and the Pewaukee home is a respite carefully designed to create new ones.

A NEW LEASE ON LIFE

Though the home was built roughly 30 years ago, you’d never know it. Gary’s father, Ted Nevermann, had it built just steps from Pewaukee Lake, and back then, it featured heavy oak trim throughout and was a maze of separate rooms. It was beautiful, Nevermann says, but was due for an update.

Unfortunately, Ted only lived in the home for a short time before passing away 23 years ago. In 2015, Gary’s mom, Mary Jo Nevermann, decided to move into a smaller, more manageable home, so the Nevermanns bought the property and, in 2017, began a year-long renovation.

“[My mom] was the first one to say, ‘these walls gotta go,’” Gary says with a chuckle.

In the home’s original state, the vista of the lake from the front door was blocked, so Matt Retzak, project designer and coordinator for Bartelt The Remodeling Resource, drew up plans to open up the views.

“Really, everything needed to be overhauled,” Retzak says. “I think the heaviest lifting was in the demolition and restructuring. There were a number of load-bearing walls that were removed and a little bump out in the kitchen to get as far out as we could to the lake. We expanded as much as we could, especially with the screened-in porch off the dining room, the kitchen and the porch. There was quite a bit of rearranging of rooms.”

With large family gatherings in mind, Gary says the home was redesigned for company. Now, guests are greeted by lake views immediately, and the layout invites visitors into the open concept kitchen, dining and living room spaces.

In the kitchen, Gary says he picked out the 12-person dining table before renovations even began, so he and Cris could host family dinners.

In the breakfast nook, Gary says they “envisioned little children hanging out, standing on the bench, putting their nose and hands on the glass, and then turning around to see their parents, grandparents, and aunts and uncles all having breakfast.”

The modern kitchen is outfitted with plenty of storage, a double oven and an oversized pantry that’s roughly half the length of the kitchen and is lit, in part, by a skylight.

In the living room, the stone fireplace is a lovely focal point — but the crown jewel is the view of the lake. A three-season porch with collapsible glass doors extends the indoor/outdoor living space.

Nothing gets in the way of the view — not even the glass deck railing that’s dotted with lights that creates an extra touch of glamour. The house is even prettier at night, Gary says, all lit up. The couple can program the lights to any color they want, but blue is their favorite.

The basement is another refuge, and the extra layers of detail in this space lend the room a lived-in look that was carefully created by Gary.

The ceiling mimics the look of stamped copper tiles but is, in fact, painted.

The textured look is achieved with artfully-applied layers of paint, and was crafted by Jen Snyder, owner of Artist by Design. Her masterful work with paint often mimics wallpaper, tiles or can give household materials an aged look.

The charred appearance of the mantle was created with a similarly laborious process — 16 layers of paint and varnish that eventually crack to give an antique visage.

“I think no matter what your background is, you’d just love [this space] and feel comfortable. We’re very, very happy with it,” Gary says, referring to the feel of his private pub. The space also features heated flooring, a stately pool table, cozy seating and the ability to walk right outside to the lake.

On the top floor, the couple kept it simple.

The master bedroom is minimal with a handsome wood bed frame and offers dashing views of the sunsets and sunrises and a roomy en suite master bath with plenty of storage and a “car wash-sized shower,” says Gary.

Heather Scott, interior designer and project coordinator for Bartelt, says the couple wanted the guest bathroom to feel like something out of your grandmother’s house, which can be felt in the Kohler vintage-look clawfoot tub and hexagon floor tiles.

“He wanted a little bit of a story there,” she says. “We kept the upstairs simple — updated the carpeting and trim to match what we were doing everywhere else. It wasn’t so much of reinvention of the wheel like it was on the main floor.”

Places where the house was reinvented certainly transformed its usability and allows the family to fully enjoy it.

No matter the season, it’s likely the Nevermanns can be found gazing out at the lake from their sanctuary — hopefully with the sounds of grandchildren playing in the background, their own children relaxing and friends having a glass of wine.

“I think my dad would be proud,” Gary says.

The screened porch off the dining room was a must for Gary and Cris Nevermann. Accordian-style glass doors open for seamless indoor/ outdoor living.

The oversized, reclaimed wood table accommodates family and friend gatherings enjoyed by the Nevermanns. The table at the breakfast nook nearly doubles the eat-in capacity.

Plentiful kitchen storage was high on the list of priorities for Cris during the renovation. Everything has its place, which cuts down on clutter. The extra-large pantry has a special touch for Gary — a glass door knob reminiscent of the one that was in his grandmother’s kitchen.

Prior to the year-long renovation, the layout of the home blocked much of the lake views. Now, with expansive windows and an open concept, Pewaukee Lake is visible from just about everywhere in the house.

Special care was taken to create this aesthetic. The copper-colored ceiling was crafted with layers of paint, and the charred appearance of the fireplace mantel was accomplished by layering paint and varnish until it cracked.

The basement bar was designed after Madison’s Kennedy Manor Bar, a college town watering hole Gary frequented while he was a student. 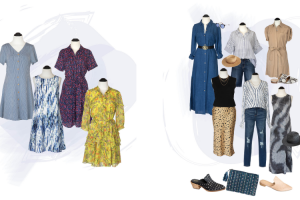 It’s still prime time to wear all of these summer goodies that easily transition into early fall. From Mild to Wild Which...
Copyright 2018 Nei-Turner Media Group
Back to top