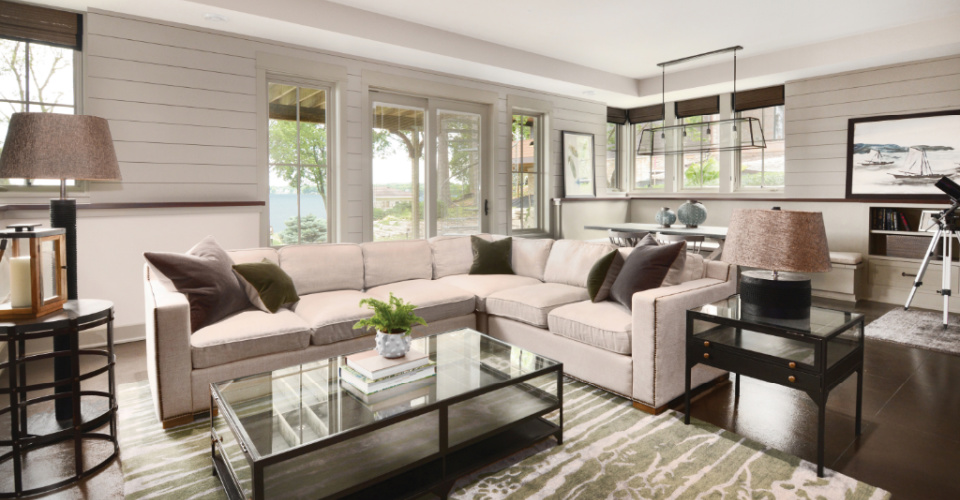 Like a favorite recipe or letterman jacket, lake home memories evoke a distinct sense of rose-colored nostalgia. Such was the case for Rick Smith, who grew up spending summers at his family’s second home on Okauchee Lake with his two younger brothers and sister.

“The memory that comes immediately to mind is growing up, my parents got us involved in sailboat racing when I was 10 or 11 years old, so we all ended up sailing as kids out here,” he says.

Back in 1983, Smith was living in Elm Grove and started looking for a vacation home on — of course — Okauchee Lake to recapture some of those childhood memories. He found a south-facing property that had a good location and a nice amount of frontage. Not surprisingly, when Smith was younger, he used to hang out with a family that lived next door to the house — so he had even been inside of the place. “So, I was somewhat familiar with the property,” he explains. Another reason he was familiar: his dad lives four doors down from the home!

Smith bought it and, a few years later in the late 1980s, did an extensive renovation to the place. For several years afterward, he used it for a lake home and would travel out to the water when he had time in between his busy schedule as an anesthesiologist. In 2011, Smith decided to move out to the area full-time along with his six-year-old son, Nathan. It was also during that time that he started looking into remodeling the home again.

“[The first remodel I did] served its purpose until around 2011. I started looking at remodeling it and, for what I wanted to do, it was too cost- prohibitive. There were limitations, since the home had initially been a lake cottage that had been added on to, so there were heating, HVAC and space limitations which factored into the interior design. So, I made the decision to tear it down completely and rebuild the house.”

Smith recruited Dale Kolbeck of Architectural Homes by Anders (who had also built his Elm Grove home) to come out and visit the property and sketch out a new home design. Smith says that he didn’t have strong opinions on the look of the home, but knew the general size and must-haves he wanted, which included four bedrooms, an office, and a lower level for entertaining with a walk-out. He also brought in Amy Carman of Amy Carman Design to consult from the beginning on the home plans.

“It was a collaborative effort between Amy and Dale, who was the architect. Amy did most of the interior elevations and the interior design of the home. [She also worked on] the cabinetry, kitchen layout and the fixtures throughout the house. You name it, she was taking care of it,” says Smith.

After the home was built, Carman honed in on what Smith’s design style was — something he admits, “I had no idea what I wanted.”

“[Rick] had lived in a couple of traditional homes. So I think he thought at first he was going to go in that direction, but as we started to talk, it turns out he likes pieces with clean lines,” explains Carman. “So we picked up momentum around that style. We wanted his home to acknowledge that [lake] lifestyle … but there’s definitely a bit of a modern streak running through the house.”

Indeed, nods to the water and sailing pop up in the shiplap walls, pieces of art and decorative elements in the lower level’s built-in bookshelves. A hint of midcentury modern unites the furnishing’s clean lines and timeless appeal. And a mix of textures adds a layered effect to the entire home, with elements of leather; soft, woven fabrics; metal accents in lighting; and décor pieces.

Smith loves being able to enjoy the water full-time with his son and fiancé — and it’s a bonus that his dad lives nearby and his brothers live on the lake, too.

Carman found great satisfaction in being able to pull together an entire look for Smith.

“Rick trusted us to furnish every room in the house … so it was super rewarding because you hang up all the artwork, make the beds and then you can turn [the home] over to your client, and they can move right in. We were lucky to have him as a client.”

Interior designer Amy Carman brought in the hammered zinc top dining table to the home’s lower level to employ a mix of materials. “We brought in metal … to add in a little bit of shine against the gray shiplap on the walls,” she says. A Visual Comfort light fixture hangs above the table.

The home’s lower level is light and bright due to the walk-out. Smith uses this floor for entertaining, so Carman suggested a dining area with built-in banquette seating. Built- in bookshelves house decorative pieces, books and games for Smith’s son, Nathan. The stained concrete floors add an indestructible element to the space.

Carman commissioned Milwaukee artist Pamela Anderson to do a custom piece for Smith’s dining room. “Rick and I gave her initial direction, the size of canvas and mix of colors. So she would paint to a certain point, and then she’d invite us back to give feedback so she could further develop the painting.”

A St. Frank surfboard hangs outside the lower level bedroom. “We just loved that this [piece] was sculptural, cool and graphic — and is a nod to the lake setting,” says Carman.

It’s the little stories living in the soft interior of Gary and Cris Nevermann’s home that make it so special. Like...
Copyright 2018 Nei-Turner Media Group
Back to top