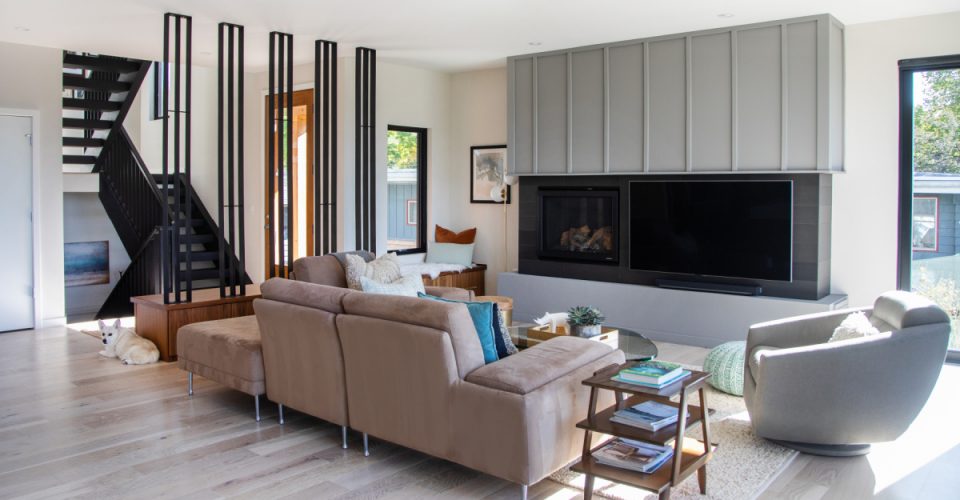 College sweethearts Lori and Cory Wallman were living in a small two-bedroom Madison home with their daughter, Vivien, when they decided that if they wanted to expand their family, they needed a bigger nest.

With two major remodels under their belt — their Madison residence and a vacation property in Los Angeles that was featured on an episode of HGTV’s “House Hunters Renovation” — they felt they were up for the challenge of a new build.

Finding a buildable lot on the lake with a sunset view (and also within their budget) was challenge No. 1. The Wallmans were outbid on a few properties before securing one in 2017 — a vacant lot on the east bay side of Lake Waubesa.

“What sealed the deal is the capitol view,” Lori says. “At night, we came out here and you can see the capitol all lit up, and it was like, ‘Oh my! This is amazing.’”

The original goal was to have the house built and be moved in by the time their son, Ty, was born. (They both laugh at this.) The design process took a lot longer than they expected, in part because they wanted their home to have a West Coast, midcentury modern appeal — and finding the materials that fit that aesthetic was difficult in the Midwest.

“It was definitely over whelming,” Cory says of the whole process. “But I think you overthink things. There are so many choices and you want to make the right decision, but there’s probably 40 decisions that would look good.”

Lori adds, “I’m an ultimate bargain hunter, too. If I see a light fixture in a magazine, I’ll either find a replica that’s less expensive or the same one on sale. I’ll go to great lengths to get a good deal, so I think I made it twice as hard on us.”

The Wallmans worked with the same Los Angeles architect — Tom Tostengard — who helped them remodel their vacation home in Laurel Canyon. He drew up plans for the exterior, but also designed some interior features, like the midcentury modern metal divider in between the home’s main entrance and the living room, as well as the TV wall, which mimics the sleek exterior of the home.

McFarland-based Urso Brothers built the home, and by the time they moved in, Ty was 1 1⁄2 years old. The four-bedroom, 31⁄2-bath home definitely matches the Wallmans’ laid-back and creative personalities. The design style is a blend of midcentury modern, Scandinavian and coastal contemporary with tons of organic details — sprawling plants and nubby succulents, macrame wall hangings and wood accents.

And many of the elements are personal to them. The artwork is reminiscent of their Los Angeles home and trips they’ve taken. Lori’s dad, a retired logger, made a few pieces for them, including a live-edge shelf for Lori’s soaker tub. And, there are cute little nooks for the kids to play in.

“The best part of living there is being surrounded by nature,” says Lori. “The lake brings so much wildlife year-round, and we love to spend time on the lake exploring. We are so happy to be raising our family here.”

This Silestone countertop is perhaps Lori’s proudest bargain find. Brand-new Silestone countertops — a combination of natural quartz and other raw materials — are expensive, so she searched everywhere for a sale, until she came across 10 sheets at a remnants store. The sheets were leftover materials from a recent sweep of commercial renovations. So, she got her dream kitchen counters for a steal.

A BIT OF WHIMSY

The Wallmans created fun little nooks for the kids wherever they could, like this tent area on the second floor and the miniature playroom in the basement. Initially, the playroom under the stairs was marked for storage, but Lori thought it would be sweet to create this instead. She ordered the custom-made Dutch door from a playhouse company in North Carolina.

It’s hard to pick a favorite spot, but the owner’s bedroom and bathroom might be Lori’s. It has the best views of the lake and an LA vibe with spiny plants, rattan accents and airy artwork.

Lori’s soaker tub is another bargain find — she got it on Wayfair for $800. She thought she’d spend a lot of time relaxing here with a glass of wine and a great view. The reality, though? The kids use it the most.

This home was featured in the Madison: Summer 2021 issue. For more photos of featured Madison homes, visit the Madison Gallery page. 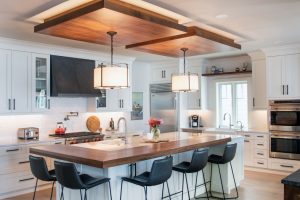 By Shelby Rowe Moyer | Photography by Shanna Wolf A man cave isn’t an unusual wish-list item. Typically, it comes in the form...
Copyright 2018 Nei-Turner Media Group
Back to top