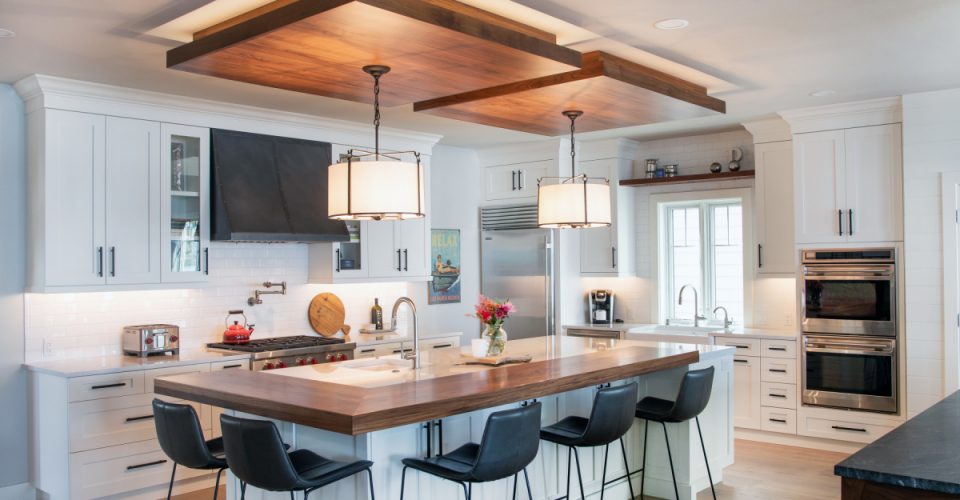 A man cave isn’t an unusual wish-list item. Typically, it comes in the form of a basement or additional bedroom. But a whole other home? That takes it to the next level.

Of course, Sarah and Joe Pavelski’s hangout spot next to their main vacation home serves as much more than that. The side- by-side properties on Lake Waubesa serve distinct purposes — the main dwelling is the family’s vacation home with four bedrooms, 41⁄2 bathrooms and a lower-level recreation room. The property next door is a multipurpose mecca for storage, entertainment and guest quarters.

The Pavelskis bought the main home in 2010, and it’s the perfect retreat for the couple and their son. The pair met in high school in Iowa and both attended the University of Wisconsin- Madison, so Madison is close to their hearts. The family splits their time between Madison and Dallas, Texas, where Joe plays in the National Hockey League for the Dallas Stars. Joe’s NHL career has taken their family all over the country, so they wanted to put down roots back in the Midwest, where they’d be closer to their families and friends, but also have access to top-notch hockey facilities.

The opportunity to buy the lot next door to their lake house came up a few years ago when their neighbors asked if they’d be interested in buying it.

“We had spoken about that with them in the past, and then they came to us and said they were ready,” says Sarah. “We thought it’d be another five years before they came to us. It wasn’t an issue of needing more space in our home, but we did need more storage and guest space.”

The Pavelskis decided to go for it, allowing them to envision a complementary structure to their home, complete with a man cave for Joe. They moved the house originally located on the lot to a different site, and with the expertise of Dream House Dream Kitchens, built their ideal entertainment spot.

The two-story structure has a double-deep garage that’s mostly used for storage in the winter, and in the summer, it takes on a second life as a workout and hockey practice area. Also on the first floor is a mudroom, shower and sauna that can be accessed from the backyard; a fish cleaning station; and storage for Joe’s recreational equipment.

The upstairs is outfitted as an entertainment suite for Joe that doubles as a lodge for guests — complete with a bedroom that sleeps six, a bathroom and fully functional kitchen.

“The way we were envisioning it was that it would definitely be Joe’s hangout,” Sarah says of the upper-level suite. “It started mainly with Joe wanting to have space for a golf simulator. He loves golf, and with the weather in Wisconsin, you can only do it for a certain amount of time during the year.”

A winding staircase brings guests up to a lounge equipped with a modern, industrial bar and two golf simulators. The walnut island, cabinetry and floating shelves were chosen to match the accents in their main house — but the rest of the fixtures are intentionally more masculine.

“It was fun to put together,” he says. “It’s almost like the garage playhouse that you want when you’re a little kid, but then you grow up and actually get to build it.”

While Dream’s staff was making Joe’s vision come to life for the upstairs lounge, they were also renovating the Pavelski’s main living space in their home next door.

Back in 2010, when they purchased the home, they had done some renovations. But by 2018, the Pavelskis realized they needed to do some reconfiguring of the kitchen and living space.

In the main house’s old layout, the oversized kitchen was taking up precious square footage, so Dream came up with a plan that maximized an open-concept layout so that the family had more room for entertaining.

“There was like 10 feet between the sink and the island [in the previous kitchen],” says Schmidt. “There was a lot of wasted space that wasn’t utilized.”

They added a walnut wood bar around the island with seating and a buffet to separate the kitchen and living room, which also gives them more countertop space when guests are over. The walnut panels on the ceiling, otherwise known as the company’s signature Dream Clouds, feature dimmable lights that create a warm, cozy atmosphere.

On the right side of the living room, large windows that looked straight into their neighbor’s house were swapped out for transom windows and a fireplace was added. Now, the family has more privacy — but they still have stellar lake views.

After owning the home for more than a decade and going through a couple of remodels, Sarah recommends living in a home for a while before making major changes.

“I’m a huge believer of using every part of your house and not having a ton of wasted space. You want a good feel of how you’ll use it,” she says. “Also, try not to get caught up in what’s pretty. Make sure you’re going to enjoy it, too. When it comes down to it, you still need to be able to use your home.”

The drop ceiling panels with dimmable lights are known as “Dream Clouds,” a specialty creation of Dream House Dream Kitchens. Strategically lowering the ceiling height in spots can make a room feel cozier.

MORE THAN A MUDROOM

On the ground floor of the secondary home is an expanded mudroom with a roomy shower and sauna.

On the upper floor of the secondary home is Joe’s entertainment suite, complete with a bar, lounge and two golf simulators.

This home was featured in the Madison: Summer 2021 issue. For more photos of featured Madison homes, visit the Madison Gallery page.