Looking at it now, it’s hard to imagine John Johnston’s Lake Geneva condo before the renovation, when it had popcorn ceilings, mirrored walls and a closed-off configuration.

When he bought the condominium in 2018, he knew it was going to be a fixer-upper. The small unit has two bedrooms and two bathrooms, and, because it’s a condo, there was only so much rearranging that could be done — due to plumbing constraints and load-bearing walls. Still, the kitchen, dining and living rooms had a lot of potential for a major upgrade to make the whole area feel more open.

Johnston worked with the late Frank Guido (a well-known builder who, unfortunately, passed in 2020) on the construction, interior designer Ann Kottler, and senior designer Natalie Spiniolas of Geneva Cabinet Company to give the condo a coastal contemporary look. At the top of the to-do list was scraping off the popcorn ceilings, removing the brick wall in the living room and gutting the kitchen so that it was open to the rest of the space.

Kottler says Johnston wanted the overall theme to be nautical and fresh, and he was willing to make bold choices. In fact, much of the design was selected around the navy hue of the cabinets, which were custom-built by Geneva Cabinet Company. Kottler says taking a chance with a colorful kitchen can feel really refreshing. Navy is a popular color choice in Lake Geneva homes because of its lake aesthetic, but it still feels clean and refined, Kottler says.

“For me, in terms of pushing the envelope, I do think it’s worth taking a chance on bold choices suggested by the design professional team that you hire,” Kottler says. “But I also think people should learn to trust their instincts. Here is A and B. Which one feels better? It’s about the space that you create to enjoy the place and make memories with your friends and family. When your space is well-designed, it feels good to be there.”

From a functional standpoint, the open concept makes it easier to entertain. The banquette-style dining area in the corner was a smart choice as it works in the small space, and it also allows more people to gather around.

“I really like the banquette,” Johnston says. “In that small space, we have several congregating areas with the stools, the banquette and the TV area.”

In the living area, the brick fireplace surround was removed and a charcoal gray slate tile from Bella Tile & Stone was swapped in, and built-in shelving with storage was added on either side. Shiplap was affixed to the ceiling for texture and can lights were installed. The can lights disappear into the ceiling so the view of the lake is unobstructed — always a must for a lakefront property.

Johnston, who lives full-time in Illinois, comes regularly on the weekends, especially during the summer, and he loves how the entire project came together.

“What you see spells it out,” he says. “It’s an undertaking doing [a renovation]. There were quite a few trips to Lake Geneva to get it right. … It turned out really well. I’m very pleased. It just fits.”

The shiplap ceiling adds texture to the room and also lends itself well to the nautical aesthetic. To bring more light into the area, can lighting was installed throughout the kitchen, dining and living room. It brightens the space without obstructing views of the lake.

The custom banquette works beautifully in the small space by seating more people than a traditional table. The fabric was sourced from Ralph Lauren, hearkening back to John Johnston’s former career working with racehorses. Everything was designed around the Plato custom cabinetry in Moody Blue, says Natalie Spiniolas.

Before, the kitchen was closed off, making the whole room feel small and tight.

One Family's Ultimate Up North Getaway 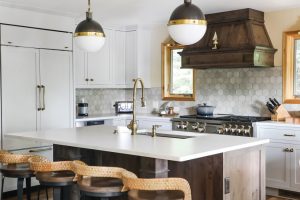 One Family's Ultimate Up North Getaway