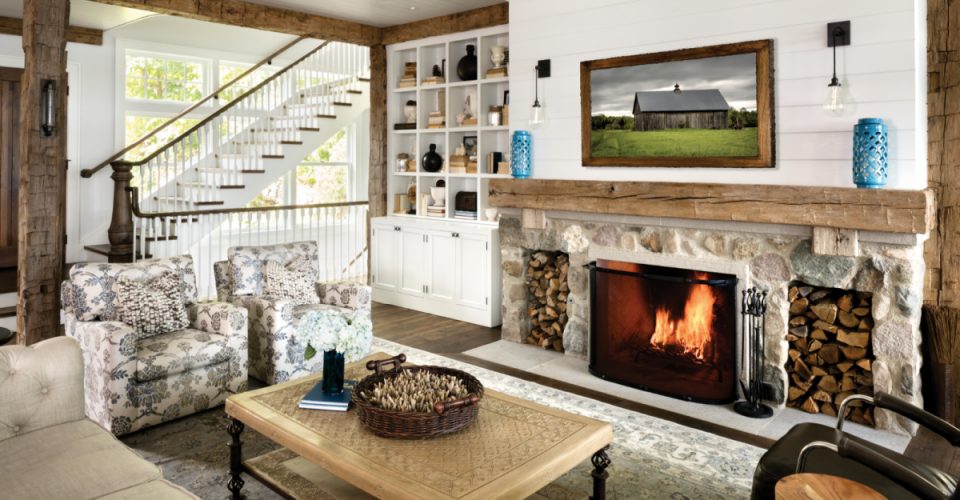 This Big Cedar Lake home is a love letter to the family that lives there. Everything about its design and architecture was executed with the family in mind — from the exterior staircase facing the lake where family photos will continue to be taken for generations to come, to the artistic rowing vessel storage that allows the family to access their boats. They can marvel at their boats from the lower-level sitting area when they’re not in use.

Milwaukee-based architect Wade Weissmann was sitting outside on a sunny Sunday morning when he was sketching the home for the family. His end goal is always to create a bold, inspiring aesthetic for the people who will live there.

He was thinking about the homeowners and their shared history as impassioned rowers, having spent much of their youth in poetic-looking boathouses. The patriarch of the family was on Harvard’s rowing team. He and his wife actually met while competing in the sport and both went on to be medalists for the U.S. Olympic rowing team.

East Coast university boathouses are iconic pieces of architecture, Weissmann says, with pitched rooflines and old-world arched entrances. Naturally, his pencil started moving in that genre of design.“If they spent all their youth going into these iconic buildings, that’s going to be something that stimulates them — or at least has a romance for them,” Weissmann says.

And he was right. The couple loved his design, and began the build process with Weissmann, interior designer Beth Wangman of i4design and Ronny Barenz of Barenz Builders.

The four-bedroom, six-bath home on Big Cedar Lake has an exterior that bears a resemblance to the old rowing houses the couple were familiar with, but with modern-day amenities. Because it’s a full- time residence, Weissmann wanted to ensure the family would be able to enjoy the home year-round, so the covered porch can accommodate rainy day reading sessions, for example. He was meticulous in the positioning of rooms and placement of windows to ensure plenty of natural sunlight illuminated the home during the drear y winter months.

Sentimentality, too, was woven into this home. The matriarch of the family had grown up coming to the lake with her family, and when she met her husband, he fell in love with it as well.

The lot itself had importance to Barenz. His own family had planned on building their home on the lot before selling it to the current owners. Having known the family for many years, he said the one stipulation in selling it was that they wanted a chance to build the home.

Each person involved in the home’s completion echoed that the entire process was very collaborative, and it was wonderful working with the family to create such an iconic statement on the lake.

“When you get a chance to design a house for a family like that, and there’s a dynamic, then the house becomes easier to design, because the priorities float to the top in a very systematic way,” Weissmann says.

When it came time to designing the interior, Wangman, who’s worked with the family for 20 years on their previous homes, says the homeowners wanted it to be “imperfectly perfect.”

She describes the aesthetic as farmhouse industrial with lots of wood and mixed metals that lend each space a refined, but cozy feel.

“They didn’t want anything they would be afraid would be ruined by kids running in with swimsuits or friends spilling a glass of wine,” Wangman says. “That’s the vibe we went with. [The wife] loves beautiful things, but she’s also carefree and laid-back.”

The barn wood stands out to Barenz as one of his favorite elements. Much of the rustic wood features were sourced from a century-old fallen barn in Wisconsin, so it has a rough, knobby texture that adds a lot of character to the rooms.

“I love the combined use of new materials and old materials,” Barenz says. “Every beam, timber and the wood flooring in the lower level is from the old barn, and it was a really cool way of blending the old and new aesthetic.”

The internal, geometric sight lines created by the roof’s architecture are another standout detail that Weissmann says was an intentional statement. The two- story height of the kitchen, for example, gives the room a wow-factor — but it also allows more sunlight to pour through. The cutouts and varying heights within the owner’s bedroom are like art pieces that naturally draw your eyes upward to the shiplap ceiling and over to the stone fireplace. It’s a true retreat for the couple.

Wangman says this is one of those homes that will stand the test of time.

“One hundred years from now, you’ll look at this house and think, ‘wow,’” she says. “I don’t think we’ll look five or 10 years down the line and think we made a bad selection. It’s classic, but current. There’s such uniqueness, and they’re going to love it for a long time.”

The laundry room has a beautiful view of the kitchen from the interior window.

“[The couple] wanted their room to be calming,” says Wangman. “A lot of things reflect their love of water, and their bedroom does that with the pale blue walls — and that fireplace is magnificent.”

The office is a visual masterpiece, and is a favorite of everyone involved in the project. The fireplace wall and ceiling beams were made from barn wood and the steel façade was aged outside
to give it that patina. The cabinetry stain took about eight months to get right. Ultimately, vinegar and steel wool was used to achieve that soft blue.

Behind the bar is a wall of windows revealing the family’s rowing vessels. “They needed a place to put their boats, an easy in-and-out [entrance] and way to store them,” Wangman says. “So we came up with a unique way to feature them so that they’re also seen as pieces of art.”

The exterior of the home hearkens to iconic boathouses (particularly Harvard University’s) where the homeowners spent much of their youth as impassioned rowers and went on to become Olympic medalists. The symmetrical pitched rooflines and arched entrance are key elements of that historic style. 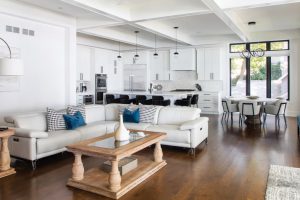 By Shelby Rowe Moyer | Photography by Shanna Wolf This is the home Stacia Hahn has been envisioning for In terms of the big picture,...
Copyright 2018 Nei-Turner Media Group
Back to top