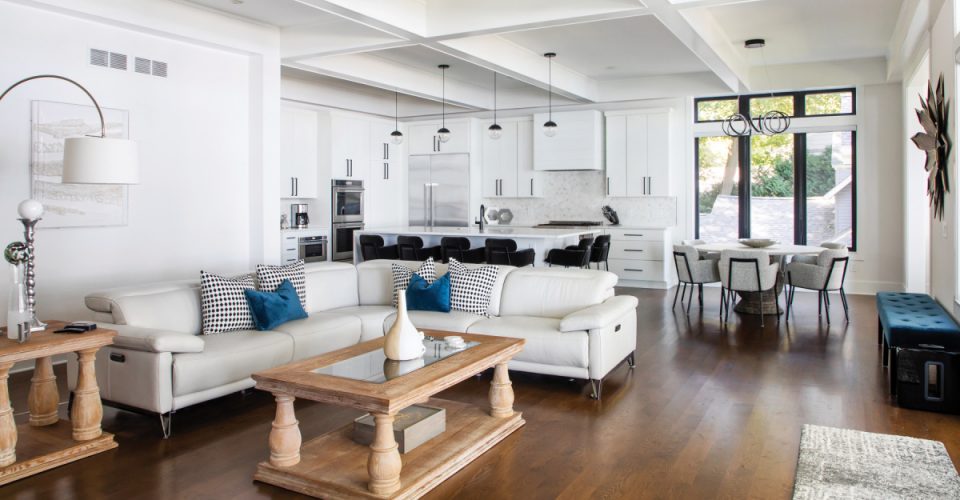 This is the home Stacia Hahn has been envisioning for In terms of the big picture, Hahn says she and Haas wanted the decades. She and her husband, Eric Haas, have lived in Delavan for the last 20 years, and while their previous home was located on the far east end of the lake, Hahn had always dreamed of living on a busier part of the lake, where activity is constantly buzzing.

In 2018, they noticed a listing for a small home on Delavan Lake. While they initially passed it over, Hahn said they ultimately reconsidered and decided it was a good opportunity to move to their desired location. After closing on the property in late 2018, the couple opted to tear down the existing home and begin building anew with Geneva Lake Dream Homes.

Hahn came to Geneva Lake Dream Homes co-owner Ernie Tuchscherer with a very specific vision. And Tuchscherer says Hahn has great taste. She did all of the interior design herself, and she knew exactly what she wanted, he says, so it was just a matter of transforming her ideas into a functioning home.

In terms of the big picture, Hahn says she and Haas wanted the lake views to be the crowning jewel in every room, and they wanted ample space to entertain. Also, because this is Hahn’s full-time residence — Haas spends most of the week in Green Bay where he works — the aesthetics were even more crucial.

“It was definitely important to have the home that was in my head for the last 20 years,” she says. “I wanted a stairway tower; I wanted a large [owner’s bedroom] and closet. I wanted a monochromatic color scheme — that has always appealed to me. I didn’t want it to be a typical lake house. You [often] see the coastal-type look with a shaker roof and siding, so I knew I wanted black windows with white siding — more modern and contemporary with a lot of black and white. Stylish and classic.”

The three-story, four-bedroom and four-bath home is certainly stylish and classic. The interior and exterior mirror each other beautifully with the monochromatic palette and clean lines that have an upscale aesthetic.

Hahn was very intentional about carrying the design from room to room. Because the majority of the interior is white, she went with white oak flooring that was stained a rich, dark hue to warm up the rooms on the main level and add some color. Design is carried through in the selection of light fixtures as well. All the fixtures are black (except in the lower level) and spherical, which help break up the linear look of the furnishings and architectural details.

The lower level is the only area that breaks away from Hahn’s white and black color scheme. It has walk-out access to the lake, which brightens the rustic, industrial gray of the bar, and the orange bar stools are the only pop of color you’ll find in the home.

“I wanted it to be more masculine,” she says. “Just to shake it up.”

In the basement they were able to incorporate some special heirloom pieces that lend themselves to the masculine vibe. In the wine room, they used Haas’ great-great-grandfather’s sofa — which they had reupholstered — and the trunk his grandmother took to college.

Tuchscherer says the look of the lower level is one of his favorite aspects of the house. “They made good use of [the space] with the pub, eating area and exercise room. Behind that, there’s an office for Stacia that overlooks the lake.”

Now more than ever, homeowners are asking for dedicated office space, as well as a flex room that can be used as a guest bedroom or an additional office — which is also present in Hahn and Haas’ home, he says.

Hahn and Haas moved into the home in May 2020, and they’ve gotten extensive use out of every square foot. The exercise room, for example, has always been on Hahn and Haas’ wish list, and with the pandemic, they’ve been able to stay healthy at home.

Her advice to others embarking on a new build is to have “a general idea of what you’re looking for before the process begins and the ability to make decisions quickly, but also take the advice of others. Be open to other opinions, especially the experts, because they’re all invaluable.”

Modern Functionality
Ernie Tuchscherer of Geneva Lake Dream Homes says the No. 1 request he gets is open-concept living. “[Homeowners] don’t want all of these dens and a dining room. They want a large eating area off the great room and large counters. Everyone wants these 8-to-10-foot islands that people can [gather] around.”

Visual Contrast
Stacia Hahn points to the dramatic fireplace as a special element. To break up the white in the room, she came up with the idea to install the black bench underneath.

The 12-foot-high ceiling with an exaggerated coffered design also adds extra dimension to the room.

Hahn has long dreamed of this statement staircase tower. The black railing was custom fabricated, and it, along with the black trim windows, creates beautiful visual depth.

Suite Style
Hahn wanted an oversized owner’s bedroom. It easily holds their king size bed, plus has a sitting area with a sectional and TV. She sourced the bed, couch, pillows and cube poufs from CB2.

Spa-Worthy
The free-standing steam shower, soaking tub and floating vanity were must- haves, Hahn says. “The shower is really large. It’s just nice to go in there and sit for a half hour, and the glass pivots, so you can fully enclose it.”

The lower level has a cool, masculine vibe that incorporates some heirloom family furniture. In the wine room, they placed Haas’s great- great-grandfather’s sofa and his grandmother’s college trunk. From Hahn’s side of the family, she was happy to mount the antelope her father shot in Wyoming over the bar, and she also has her grandfather’s cigar table and her great-great-grandmother’s gold pocket watch.

Outdoor living is abundant with the family’s two decks and lower-level seating area. Hahn says the fire pit on the lower level was a must.

Pure Elegance
The vanity was custom-built based on a sketch Hahn made to convey her vision, and the floor tile was carried into the shower and up the wall to make the room feel longer. 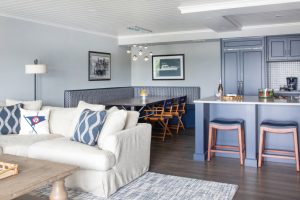