View This Tudor Home Makeover on the Water 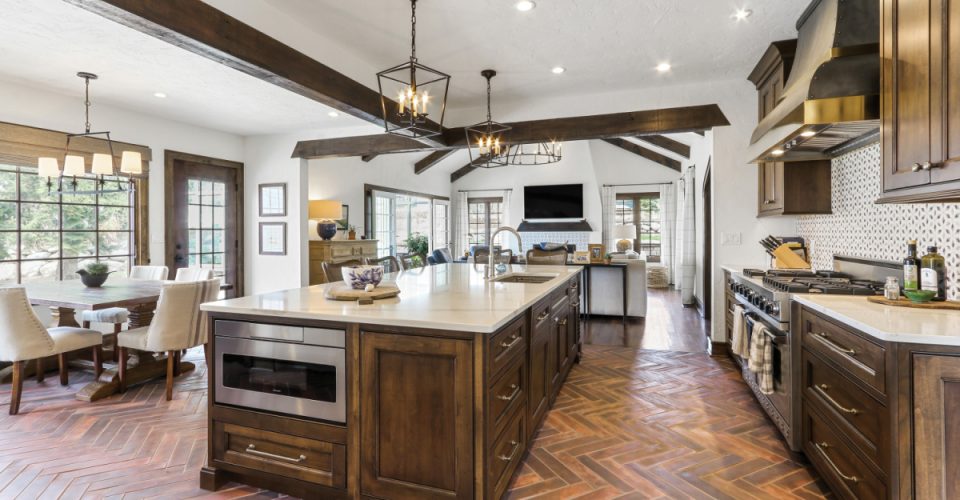 For nearly a decade, an Illinois-based couple were on the hunt for a lake home. While their primary residence is in a northern Chicago suburb, they were interested in finding — or perhaps building — a year-round vacation home somewhere in the greater Lake Geneva area. Both had childhood ties to the locale and were hoping to establish a special space they could enjoy with their four children and growing number of grandchildren.

The homeowners had a specific feel in mind: A place that evoked the cozy warmth of cottage life, with colors and patterns inspired by nature. The house the couple eventually found was a sprawling, English Tudor- style home that was dark and rather somber. The century-old structure also had a fractured layout, thanks to numerous additions over the years. But with 125 feet of shoreline and pristine views of Delavan Lake, the couple knew they’d found their dream home.

The couple purchased the home in August 2017, eventually tapping Lake Geneva Architects and Elkhorn’s Stebnitz Builders to help them reconfigure the five-bedroom, four-and-a-half-bath structure into one that fit their lifestyle. Another goal was to better integrate the home’s various additions.

“The house lacked continuity in its architecture,” says Jeff Auberger, design and remodeling consultant at Stebnitz Builders. “It was also very segregated.”

One of the main problem areas was the kitchen. Small and rectangular, it shared a wall with a small bedroom that blocked the lake views. Two small half-baths — one opening into the bedroom, the other into the kitchen — also took up more valuable space.

Stebnitz Builders removed the bedroom and half- baths, which enlarged the kitchen twofold. The additional space allowed the couple to create a dining area and install a spacious, 10 1⁄2-foot island. The island is crafted out of alder cabinetry and has a sink and built-in microwave oven.

Best of all, the couple added a picture window to the former bedroom’s exterior wall. Flanked by two doors with divided light grills, all of this glass allows gorgeous lake views and plenty of light to spill into the once-dark kitchen. The kitchen also receives a boost of sunlight from the adjacent family room, which now flows into the kitchen.

To help tie the rooms together, and to remain true to the Tudor style, Auberger recommended introducing exposed beams with clipped corners into the kitchen, with a mini version used as the new fireplace mantle.

“I really pushed to have a beam added to the large opening separating the kitchen from the great room, and to bring in a smaller version on the mantle,” he says. “They really make the home seem more architecturally consistent.”

To further meld the two rooms’ look, the tilework on the kitchen walls and fireplace surround feature blue-and-white Monet-inspired patterns, while the fireplace hearth and kitchen flooring both sport herringbone-patterned clay tile. “That tile is indestructible — and great for kids with wet feet,” says the homeowner.

Another notable accomplishment during the eight-month renovation is the home’s reimagined solarium, which is accessible via both the lakeyard and family room. The original structure was white and featured an opaque, acrylic ceiling. The new solarium was designed by Minneapolis-based Conservatory Craftsman, and was assembled on-site over the same footprint. The space boasts attractive, diamond- paned transom windows and a glass ceiling that lets in the sunlight. It’s also a soothing, gray-green color.

Two rooms the couple barely touched are the living room and hearth room, which are both off the front entryway. The living room features the original floor-to-ceiling fireplace, crafted out of Wisconsin fieldstone, plus original exposed wooden ceiling beams. A blue-and- white patterned area rug and throw pillows evoke the sapphire lake outside, while echoing tilework in the family room and kitchen.

“We want this space to be the place where we gather to have a glass of wine and maybe play dominoes or cards,” the homeowner says.

The hearth room derives its name from the arched-brick fireplace that dominates one wall. It’s one of the home’s numerous additions and includes a Murphy bed. While the homeowners don’t use the room now, they anticipate using it as a fifth bedroom for their grandchildren, when needed.

The homeowners have a few minor projects still on their to-do list, namely fixing the walls and windows in the home’s sun porch. But they’ve already gotten a lot of enjoyment from their new escape, and give props to Stebnitz Builders for making the long-distance project less stressful.

“Stebnitz was exceptional,” the homeowner says. “They were great with problem-solving and the expertise of the crew was outstanding! [And] we are so very thankful to all of the previous owners that added their rich histor y to this home.”

“We took a very chopped-up home and opened it up, and made the space feel very natural and correct,” he says. “For me, when it comes to older homes, it’s about creating a space that feels historically correct, but lives like a modern home.”

MORE ABOUT THIS HOME

The home’s wet bar resides in the new, glorified mudroom that lies off the family room. While the homeowner describes the room as a catch-all space, the distressed maple bar provides an attractive accent. Two reclaimed wood shelves from Elkhorn’s Heritage Beam and Board float on a brick wall, while a small sink sits off to the right. “We wanted this space to be kind of quirky and fun, like the rest of the house, so we put the sink in an unexpected place in the corner with the faucet on the wall,” the homeowner says.

The kitchen’s eating area was once a small bedroom that concealed the gorgeous lake views. Tearing down the walls considerably brightened the kitchen, plus allows the lake vistas to spill into the room.

The homeowners greatly enlarged the home’s narrow, rectangular kitchen by eliminating an adjacent bedroom and two half-baths. An expansive knotty alder island is now part of the kitche which seamlessly flows into the adjacent family room.

The Viking range came with th home, although it used to resid in a different spot. Its striking range hood is an artful new addition. Created by Raw Urth Designs, a craft metal fabricato in Fort Collins, Colorado, it replaced a dated wooden one.

The home’s original solarium featured a heated floor and opaque ceiling, which blocked views of the sky. The homeowners kept the floor, but replaced the structure with a much larger, airier one featuring a glass ceiling and decorative transom windows. Bonus: To help keep the room warm when the temperatures fall, the family room’s direct-vent fireplace was constructed to send half of its heat into the solarium.

Windows in the home’s octagonal dining room needed to be restored — they were the originals — but didn’t need much additional work. The homeowners added new window coverings, opting for Roman shades with a trellis-type pattern in a nod to their original intention of creating a cottage feel in the home.

When the homeowners purchased the home, the kitchen sink was against a back wall. Post-remodel, it’s part of a 10 1⁄2-foot, knotty alder coffee bar, which includes a small fridge for the grandkids’ favorite beverages.

This patio is the spot where the homeowners gather to cook out and enjoy pleasant sunny days. The mudroom and wet bar are easily accessible.

The home’s primary bedroom features a patio door to a small balcony, plus wonderful lake views. “It’s so lovely to wake up and look at the water,” the homeowner says.

This hearth room was an addition created by a previous homeowner and now includes a Murphy bed. “It will end up being a kids’ room for the grandchildren someday,” the homeowner says, noting they have five young grandkids, two of whom recently arrived.

The home’s living room features original ceiling beams and an eye-catching fireplace crafted from Wisconsin fieldstone. The blue-patterned rug and throw pillows are reminiscent of the tile surrounding the family room fireplace, as well as the kitchen backsplash tile. They’re also meant to evoke thoughts of Delavan Lake, sparkling in the background.

Turn Your Outdoor Spaces into a Backyard Oasis 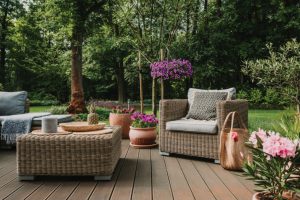 Turn Your Outdoor Spaces into a Backyard Oasis

By Annie Rosemurgy The ongoing pandemic has been rough for everyone, but one result is that people are continuing to get creative...
Copyright 2018 Nei-Turner Media Group
Back to top